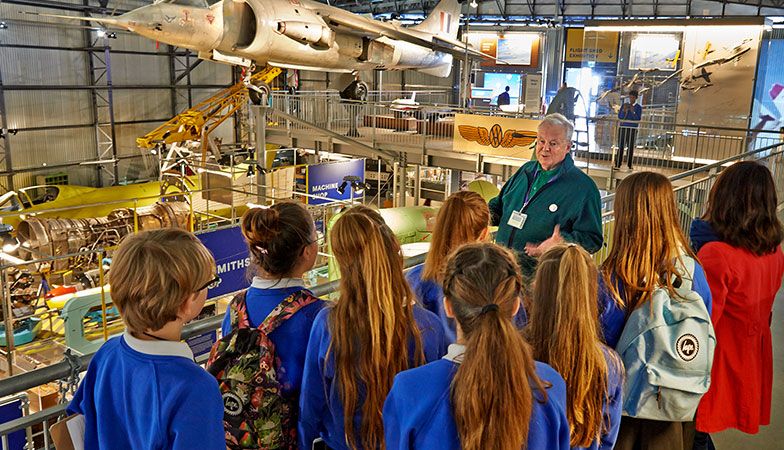 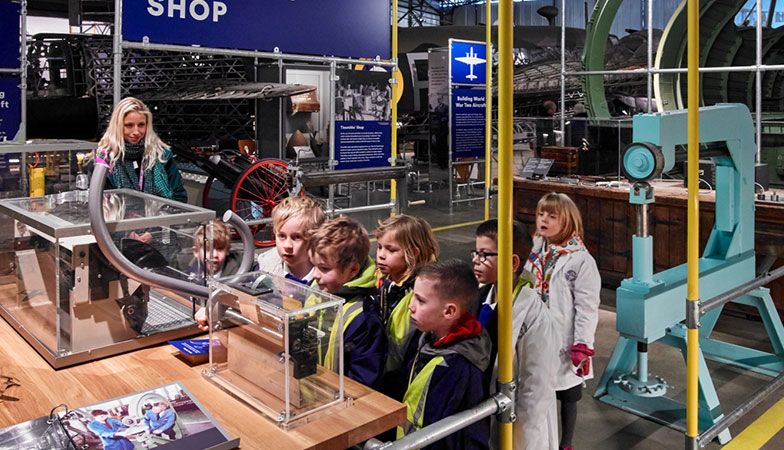 Brooklands Museum supports learning outside the classroom through a range of workshops, tours, activity days and resources that will inspire and engage pupils of all ages.

Use the drop-down below to explore our different workshops, guided tours and visit options.

The general admission price per pupil is £5. One adult FREE per six pupils.

Prices for individual workshops quoted below are in addition to the General Admission price.

For more information and our booking guide please read the FAQ

Explore our Collection of cars, bicycles, aircraft and more in your own time.

If you would like to book a self-guided visit, without any additional workshops or guided tours, your group will be charged a General Admission fee. Workshops and guided tours are an additional cost per pupil.

In this guided tour your pupils will discover the development of land transport from the first bicycles to modern-day electric vehicles. They will be accompanied by an expert guide through our bicycle, motorbike, motor vehicle and Formula One exhibits, learning about the effects of forces such as friction, air resistance and gravity on moving objects.

Your pupils will walk on the original Brooklands racing circuit, discovering the stories of early motor racing pioneers such as Malcolm Campbell and Kay Petre. They will learn about aerodynamics and the effects of centrifugal force.

In this guided tour your pupils will explore our aviation exhibits to learn about the development of aircraft technology and manufacturing materials over the twentieth century – from the earliest bamboo gliders to the fastest passenger aeroplanes ever built.

Your students will discover the people that worked at Brooklands to innovate aviation, including Barnes Wallis, inventor of the Stratosphere Chamber and bouncing bomb. Your students will visit Air Raid Shelters to learn about Brooklands’ links to the First and Second World Wars.

This guided tour includes a short walkthrough of Concorde.

In this workshop your pupils will design and build their own racing car from recycled materials. They will discover forces such as friction and air resistance and the importance of aerodynamics. After testing and tuning their vehicle, pupils will have the chance to race their creation on the original Brooklands track!

What did an ARP Warden wear when patrolling the streets during the Blitz? What did a baby’s gas mask or a food ration card look like? Why is Brooklands Museum home to Air Raid Shelters, pillboxes and other WWII defence structures?

In this workshop your pupils will learn about many fascinating objects from Brooklands Museum’s collection, focusing on the Second World War. They will hear about the stories of the people who worked at the Brooklands aircraft factories during the conflict.