Because Brooklands was the world’s first purpose-built motor racing circuit, there were no established rules to follow. To begin with, many of the procedures were based on horse racing traditions, partly in an attempt to attract a ready-made audience to this new and curious sport. Cars assembled in the ‘paddock’, were ‘shod’ with tyres, weighed by the ‘Clerk of the Scales’ for handicapping and drivers were even instructed to identify themselves by wearing coloured silks in the manner of jockeys.

On the morning of 15th February 1913, in front of a large crowd of press and public, the small but courageous Brooklands racing driver, Percy Lambert, achieved 103.84 mph. Tragically, while trying to improve his own record a few months later, after promising his fiancée that he would attempt no more, he crashed and was killed on the Track. Many still say his ghost regularly walks at Brooklands in full racing attire.

Motor racing stopped at Brooklands in 1914 with the outbreak of World War One. 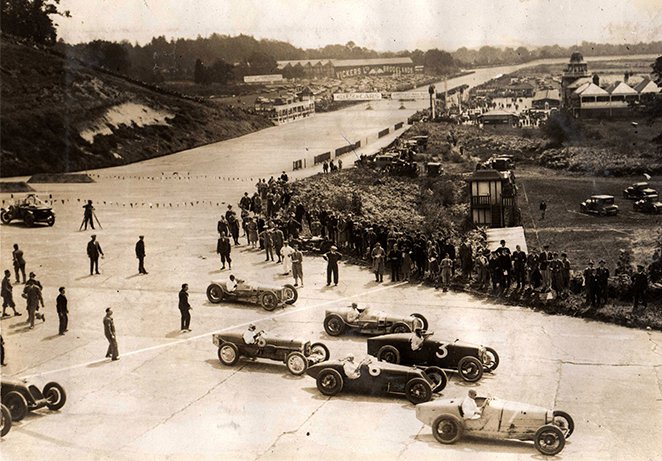 During the First World War the solid tyres of military lorries had played havoc with the track, and it was not until 1920 that Locke King had cleaned up sufficiently to enable the Brooklands Automobile Racing Club (BARC) to take over once again.

Throughout the 1920s the BARC continued to organise big popular race meetings, including the Junior Car Club’s famous 200 Miles Race, which first began in 1921. It was at this time that pre-war driver, Malcolm Campbell, returned to the scene from Army service as a Captain.

Count Louis Zborowski was another great personality of Brooklands and raced a series of monstrous cars on the Outer Circuit, including the legendary Chitty Bang Bangs, in the early 1920s.

In August 1926 the RAC organised the first-ever British Grand Prix, constructing sand chicanes along the Finishing Straight. The Junior Car Club 200 Miles Race was run again later that year and the race was won by Major Henry Segrave in a Talbot. A second British Grand Prix was held at Brooklands in 1927.

Another Club that staged ambitious races at Brooklands was the elite British Racing Drivers Club, BRDC, which was founded in 1927. Their first event was the 500 Miles Race of 1929 which was destined to become the fastest long distance race in the world. The other coveted BRDC trophy was the British Empire Trophy. Races of this calibre presented a challenge to great names such as John Cobb, S.C.H.’Sammy’ Davis, Henry ‘Tim’ Birkin and the Dunfee Brothers. 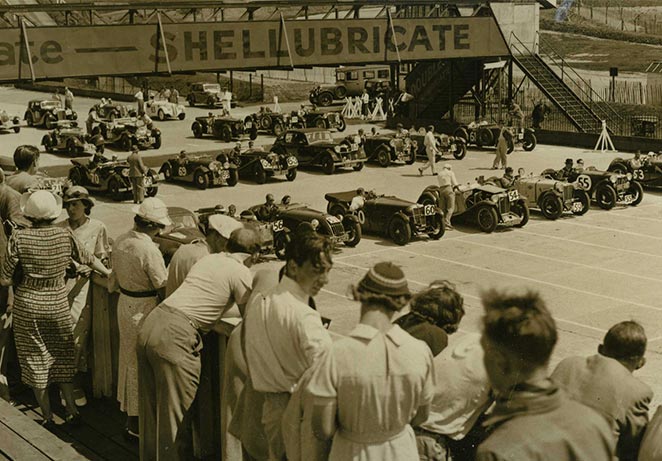 The popularity of Brooklands grew throughout the 1930s. In 1930 the Clubhouse was extended to accommodate the social appeal of race meetings and the BARC adopted the slogan ‘The Right Crowd and No Crowding’. Brooklands, which was still the preserve of the wealthy amateur, became a fashionable venue on the sporting calendar along with Henley, Wimbledon and Ascot. Members of the BARC were often members of the Brooklands Flying Club as well and the airfield was a lively part of the track. The Paddock was a busy place as popular heroes mingled with Club Members or those spectators who could afford a paddock transfer pass into the 'inner sanctuary’.

The Junior Car Club continued to hold races at Brooklands and organise club days for trials and driving tests, but was most famous for its big international race meetings. The Double Twelve Hour Race came about because night time noise restrictions meant 24 hour racing was not permitted at Brooklands. The event was divided into two daylight sessions with the cars being locked up overnight. The International Trophy was held every year from 1933 until 1939, for the first time large and small cars started together and raced for 250 miles - the faster the car the more severe the course as it negotiated its 100 circuits. This race attracted great names like Captain Malcolm Campbell, Kaye Don, Earl Howe and Elsie Wisdom. 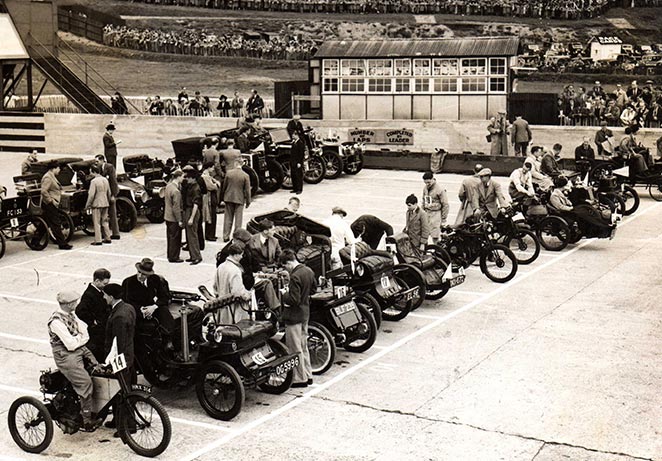 The End of Motor Racing at Brooklands

The BARC held its last ever meeting at Brooklands on 7th August 1939.

With the outbreak of World War Two, the aerodrome was requisitioned by the Government and devoted to the production of Vickers and Hawker aircraft, including Hurricane fighters and Wellington bombers.

When peace returned, everyone lived in high hopes of the Track’s eventual recovery but the anticipated costs were too high. Temporary hangars had been erected on the Track, German bombs had exploded on various parts of the Track in 1940 and camouflage was used heavily in the form of tree planting and canvas houses to obscure Brooklands’ distinctive shape which made it an easy target for the Luftwaffe. The government could not see its way to releasing Brooklands until 1949 and consequently the shareholders of Brooklands (Weybridge) Ltd voted in favour of selling the track to Vickers-Armstrongs Ltd in 1946 and motor racing at Brooklands gradually became no more than a memory. 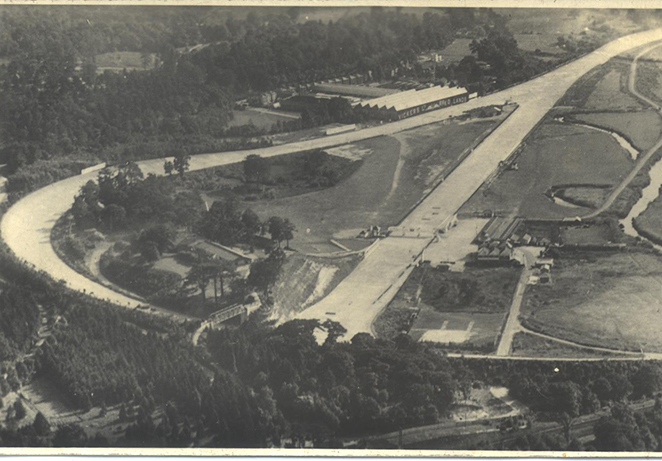 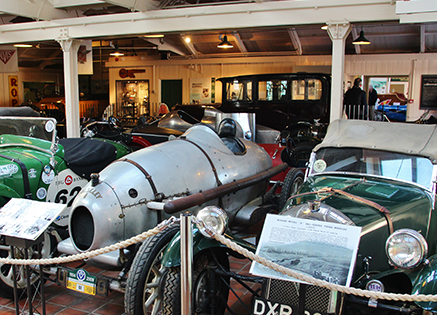 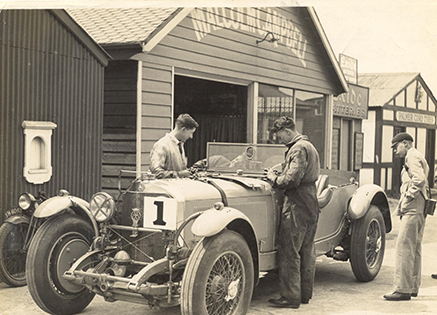 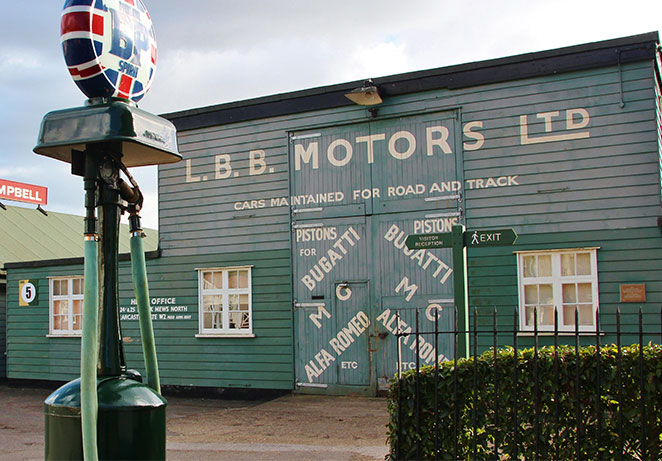