Around 1912, Californian aviator George D White designed a number of basic light aircraft which he supplied as either plans or in kit form to budding aviators around the world. The aircraft used a motorcycle engine for power and promised to give more people access to the growing sport of aviation. The ‘Sports’ monoplane was White’s second design and followed the basic layout of monoplane design that was becoming common after Bleriot’s successful crossing of the English Channel.

This replica was built by Brooklands Museum volunteer Julian Aubert with the intention of attempting to fly the aircraft. 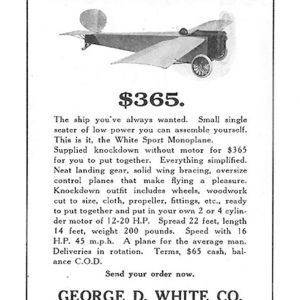 Other aircraft in Flight Shed