To those who gave so much, we thank you.

On the 8th May 1945 after six long years of war, Victory in Europe was declared. There were celebrations throughout Britain with services, street parties and dancing. Today on the 75th anniversary we remembered all those that fought in the armed forces around the world and all those on the home front for their service and sacrifice during the war.

We remember the men and women who worked in the factories around Brooklands, building over 3,000 Hurricanes and 2,500 Wellingtons and the 83 that lost their lives and 419 injured in the September 1940 bombing of the Vickers Brooklands factory.

To celebrate the spirit of the generation watch this compilation of film from IWM Archives, showing thousands of people gathered outside Buckingham Palace on VE Day, local celebrations at King’s Langley in Hertfordshire and victory celebration scenes in Trafalgar Square.

Take a minute to listen to 'Sisters in Spitfires' Poetry readings by Alison Hall at our 2016 1940s Relived event, performed in the Wellington Hangar in front of a Hawker Hurricane. 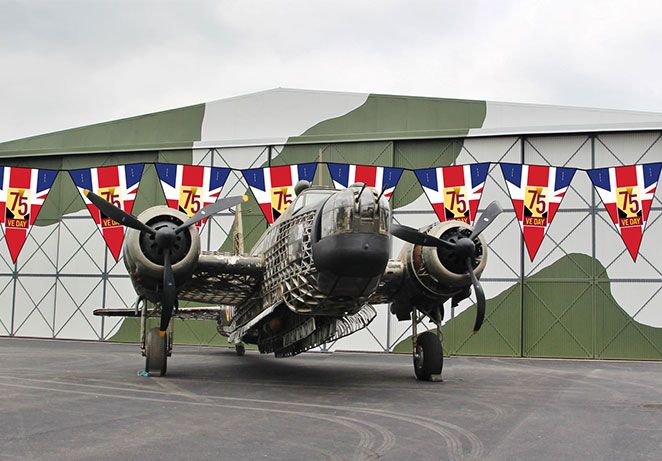 We need help to decorate our Hangar for our VE Day street party.

We’ve uploaded a handy little template so you can decorate our Hangar at home, download our template and get decorating! Don’t forget to share your creations with us using #BrooklandsVEDayParty