Behind the Scenes with the Motoring Team

In our latest blog series, we're going behind the scenes at the Museum with our staff and volunteers. This week Debbie Crawt has written about a year in the life of the Motoring Team.

The threat of change was there, lockdown was mentioned but what did that mean? Who would be affected? How would museum life change?  We'd just have to wait and see.

Fortunately, amid statement and rumour, the team had taken all possible precautions. Tyres were checked and inflated, batteries changed or placed on charged, and drip trays carefully positioned. At least, with spring around the corner, we didn't need to worry about frosts and antifreeze. The baton was passed, it was now up to the museum staff to care for our charges, keeping them safe and secure and the moths and mice at bay.

The early days were peaceful, then strange, then difficult. I was fortunate enough to have a part-time job, at a well known high street store. Not just any high street store you understand, I was working with Colin and Percy!  It kept me occupied for four hours a day, a reason to get up and go out. It was hard, it was scary, but life for the rest of the team had changed totally, no more club runs, no more events, no more Thursdays at the museum.

We needed regular contact, weekly updates, that's what we'll do. It kept the majority of the team in touch and for those without email a regular phone call to check all was well. Initially, it was news, from the cupboard to the shed to the garage. Projects were started, decorating for some, reading and research for others, tomato and runner bean growing for the newly green-fingered, but for the more ambitious amongst us, it was swapping your current engine for a V8 or a bare metal restoration of an MGC. With the rise of Zoom, another medium opened up to us. The majority of the team embraced technology, a new dimension where we could see each other and our achievements, chat and discuss projects and problems at length, a little like old times. To be honest with no real protocol it was often chaos, but it was fun.

The weeks drifted by and then it came, an email from Heritage Engineering Manager David Morrison asking us to return. It was July and the museum planned to open to the public on 1st August, we had just a couple of weeks to prepare all the cars for the demonstration runs. With holidays cancelled we returned en masse, with a variety of new hairstyles, beards and a broken arm, but that's another story! Observing the strict Covid restrictions we emptied the sheds and the work began.

We all know that cars need to be run regularly particularly the vintage and classic otherwise issues arise. With generally four months of inactivity and the odd one or two close to seven, we were faced with a number and variety of problems, from bad fuel, flat batteries, blocked pipes and filters to deflated tyres and non-responsive autovac systems.  This would be a challenge but one we were more than happy to accept.

Of particular concern was a persistent and annoying misfire on Daisy, a broken gear lever on the Railton Terraplane plus what appeared to be a close encounter with a door, a blockage in the Napier Colonial fuel line and a host of issues besetting the Morris 8, amongst them damaged pistons, broken rings, a blowing gasket and burnt valves. All were fixable with time so we pressed on watched over by the ever-present film crew. It's always an interesting experience being filmed, two hours removing a floor and bulkhead full of worm becomes a two-minute slot, the Morris 8 engine was in, then out, then back in again and the Merryweather Fire Engine brought out from its dank, dark lair was run up and down the finishing straight numerous times just to get the right shot.

Besides all the activity at the Museum, the team had engaged in a few external projects. Austin 7 engines were swapped in Walton, railings, (ex Brooklands display), were delivered to Horsley to keep out the deer and a second Austin 7, in several pieces it has to be said, was rescued from a garage in Cobham.

And then, another lockdown! Once again, amid statement and rumour, we were well prepared, and by 15th December, with all previous preparations in place,  every car radiator had been drained and filled with a solution of antifreeze where appropriate. This time the restrictions seemed somewhat harder with no family to visit, no cupboards, sheds or garages to tidy it was difficult to keep occupied. The Zoom meetings continued, more research was undertaken, particularly for the cars featured in the forthcoming documentary, and frequent consultation with museum staff over details began.

Finally, delight! at the beginning of April 2021 the anticipated mail arrived. "We would like a small number of the motoring team back at the museum to prepare the cars for reopening". The process had started all over again, but this time without the lovely film crew. 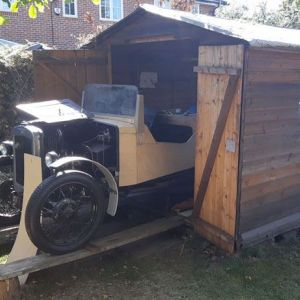 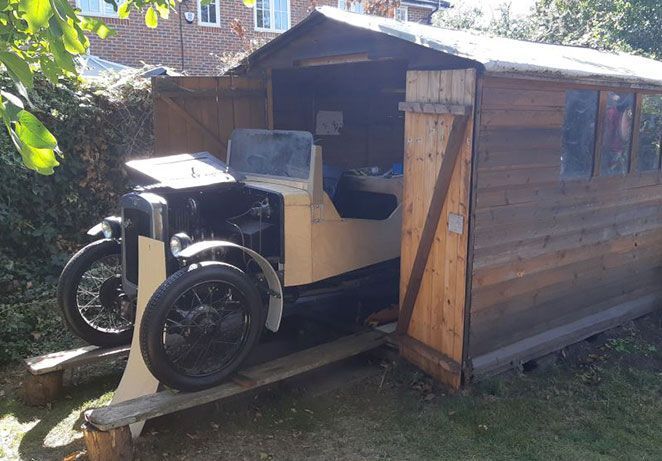 The Austin 7 in Walton awaiting an engine swap 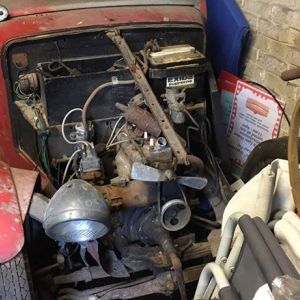 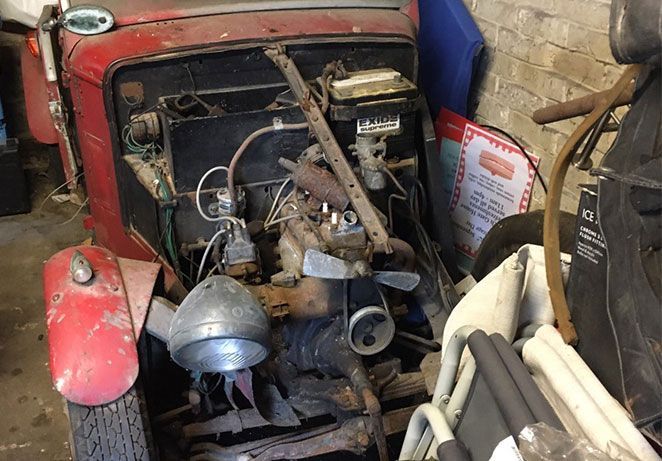 The Austin 7 rescued from a garage in Cobham 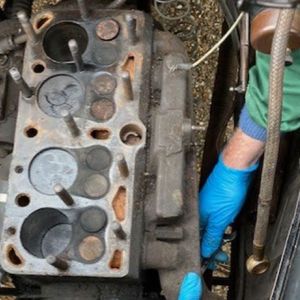 The Morris 8 engine causing all problems