In our next Brooklands Stories, volunteer James Thorne explores the story of Frank Halford, engineer extraordinaire and competitor in the first British Grand Prix.

Frank Halford was one of the nine starters in the first-ever British Grand Prix, held at Brooklands on 7 August 1926. He did not finish and he never entered another Grand Prix.

But every fan of motorsports – indeed, every fan of anything with an engine – should know all about him. Here’s why.

Born into a family of Nottingham estate agents on 7th March 1894, Frank Bernard Halford showed an aptitude for engineering while at Felsted School, Essex, and went on to study the subject for two years at University College, Nottingham, although he did not complete his degree.

Instead, determined to get a more practical, “hands-on” exposure to the subject, in August 1913 he enrolled at the British & Colonial Flying School (known as the “Bristol School”) at Brooklands, where he learned to fly on the Bristol Boxkite. By October 1913 Halford had been awarded his Royal Aero Club Aviator’s Certificate (number 639), and by December 1913 was a flying instructor with the Bristol School – the youngest in the country, according to the Nottingham Daily Guardian.

On the outbreak of the First World War, Halford joined the Aeronautical Inspection Department, Farnborough, as an engine examiner. The AID was responsible for overseeing design and development, quality control and delivery of orders for aircraft and engines, and it was there that he first met Geoffrey de Havilland, with whom he would have a life-long professional relationship. Frank also joined the RFC as an NCO, in order to allow him to spend time in France assessing the suitability, performance and reliability of aero-engines “in the field”, particularly at the RFC’s Engine Repair Shop, near Rouen.

By now a Lieutenant, Halford returned permanently to Britain in May 1915, to join a subsidiary of the William Beardmore engineering company, where (with chief engineer Thomas Pullinger) he helped develop the BHP (Beardmore-Halford-Pullinger) engine which (with its evolution, the Siddeley Puma) was used in the DH.4 and DH.9 aircraft, among others. Having also developed supercharged engines for high-altitude use, such as the BHP “Atlantic” and “Pacific”, by the end of the War Halford (now a Major) was working as assistant to the head of aircraft engine production at the Air Ministry.

After the War ended, Halford married, resigned his commission and joined Harry Ricardo at Engine Patents Ltd, spending 2½ years in the USA, selling licences for Ricardo products from the office he established in Cleveland, Ohio. He returned to the UK in 1921, helping to develop a Ricardo engine for the 500cc Triumph motorcycle, which he raced himself at Brooklands and in the 1922 Isle of Man TT, and also working on the development of racing fuels for motorcycle engines and on the design of a luxury, 4-cylinder shaft-driven motorcycle for Vauxhall.

Back to Engine Design

In 1923 Halford established in his own consultancy in London and, working first with the Aircraft Disposal Company (set up in 1920 primarily to dispose of the vast stock of surplus aircraft and engines built up during the War) and then the de Havilland company, Halford designed and developed many of Britain’s most successful and widely-used aircraft engines, including the V8 ADC “Cirrus”, used in the de Havilland Cirrus Moth, and the de Havilland “Gipsy” series of smaller, 4-cylinder in-line engines which would go on to power (among many others) the DH60 flown by Amy Johnson from London to Australia in 1930 and the Blackburn Bluebird flown around the world the same year by Mildred Bruce.

Halford would go on to design all of de Havilland’s engines into the 1940s, including the company’s first jet engine, the Halford H1 (also known as the DH “Goblin”).

Meanwhile, in 1923 Halford graduated from two wheels to four, at Brooklands and elsewhere, and became a familiar participant at race meetings at the Track. From early 1923, he had been helping to prop up the Bamber & Martin company financially, with two loans of £1,000 each (although it is not known if there had been repaid when the company went into receivership a few years later), and his connections with the company led to him racing, among others, the Aston Martin “Razorblade”, in which he took a victory in August 1923 and also set a Test Hill record.

Halford took a break from racing at the end of 1923 in order to concentrate on designing an engine for a racing “Special”, which he would base on a 1923 Aston Martin short chassis GP replica. This would become the “Halford Special” in which he would line up for the British Grand Prix, 2½ years later. Drawing on his decade of experience with aircraft engines, Halford designed a 6-cylinder, 1.5-litre engine, initially featuring an exhaust-driven blower rather than a supercharger driven by the engine itself - the first time a turbocharger had ever been fitted to a car engine.

Unfortunately, the power benefits of the turbo were not as substantial as hoped so, rather than spending time and expense refining the design, Halford replaced the turbo with the standard supercharger, the engine now giving 96bhp at 5,500rpm.  A turbocharged racing engine would not be seen again in the motor racing arena until the appearance of the Renault turbo Formula 1 car more than half a century later, in 1977.

The car, initially with white body and ultramarine chassis and wheels, first appeared as the AM Halford Special at the 1925 Brooklands August Bank Holiday meeting, before tackling the JCC 200-mile race in September. Halford was running 3rd at half-distance in the “200”, before mechanical gremlins intervened, the car eventually finishing 9th overall and 4th in class.

At the end of the year, a fresh engine was installed, giving 120bhp at 5,500rpm, and the original Aston Martin radiator was replaced, the car henceforth being known simply as the “Halford Special”. It was in this configuration - but painted in the national racing colour (green) - that the Special took part in the first British Grand Prix the following August.

And the car ran extremely well in the race.

Fifth at the end of the first lap, and although lacking the out-and-out speed of the works Delage and Talbot cars which had torn off into the lead from the start, Halford was still on the lead lap, in fourth place, after ten laps, a number of his rivals already having been delayed by pit-stops or forced to retire from the race. Running consistently, if unspectacularly, Halford made his one pit-stop for fuel and tyres at exactly half-distance (55 laps), by which time the Special was holding 3rd place.

Resuming 4th, Halford soon re-took 3rd from Malcolm Campbell’s pale blue Bugatti, a place he held until the works Talbot of Albert Divo – who had been delayed by around 10 laps early on and was pushing hard to recover – overtook sometime around laps 66-70.

Unfortunately, accelerating out of the first sand-bank chicane at the end of his 82nd lap, a universal joint broke and the Special slowed as it passed under the footbridge, causing the following Delage of Louis Wagner – who had recently relieved Robert Sénéchal at the wheel – to swerve and take the middle span of the bridge in order to avoid a collision. Halford’s race was run, and he received warm applause as he pushed the car back to the pits.

Might the little Special have pulled off a spectacular victory, had it not been for that broken universal joint? When he withdrew, Halford had been running comfortably with (albeit 3-4 laps behind) the eventual winner, but before the Delage’s exhaust problems caused Wagner to pit with increasing frequency over the final fifteen laps or so to relieve his burning feet.

However, Halford was at the time also only about 1.5 miles ahead of Campbell who, despite running without further trouble and increasing his speed towards the end, was still 10 minutes or so (or 3-4 laps) behind the ailing Delage at the chequered flag.

It, therefore, seems unlikely that a win would have been within Halford’s grasp, even had he been able to keep going; but it was in any event a highly creditable and noteworthy achievement to have been so competitive in an international (World Championship) Grand Prix, driving a car powered by an engine of his own design.

After the Grand Prix

Halford returned to Brooklands with the Special for a number of further races in 1926, including the JCC 200-mile race, in which he finished tenth overall, despite only having top gear for much of the race. After that, the car was sold to George Eyston, who raced it in one Grand Prix (the French) in 1927 before discarding it as “not being fast enough”.

Halford himself meanwhile carried on with his aircraft engine consultancy and design activities, also sitting on the Advisory Committee to the Ministry of Aircraft Production in the Second World War, and designing such engines as the Napier Sabre (used in the Hawker Typhoon and Tempest aircraft, and one of the most powerful piston aircraft engines ever developed) as well as the Goblin and Ghost jet engines – the former powering not only the de Havilland Vampire, but also Malcolm Campbell’s Bluebird K3 boat (the project abandoned due to Campbell’s increasing ill-health) and the latter powering the DH Comet passenger jet as well as John Cobb’s “Crusader” boat, which tragically crashed during a water speed record attempt on Loch Ness in September 1952.

A Fellow of the Royal Aeronautical Society from 1927 (and its President in 1951-52), Halford won many awards throughout his career and was appointed CBE in the 1948 New Year’s Honours. He died on 16 April 1955.

FB Halford in his AM special outside Airdisco Works 1926

Frank Halford with the Halford Special with his wife,  JCC Meet 1926

Frank Halford racing at Brooklands in the Halford Special

Illustration of the Halford Special engine. 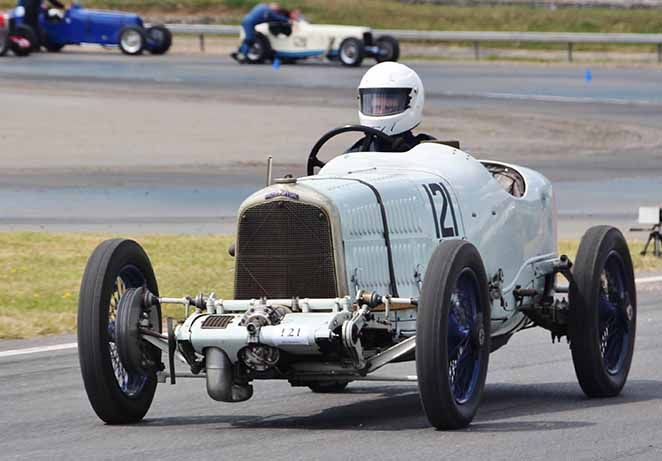