This year we celebrate the 95th anniversary of the first British Grand Prix, which was held here at Brooklands on 7th August 1926. Volunteer Peter Kearns explores how Grand Prix racing came to Brooklands and what happened afterwards.

Grand Prix motor racing has its roots in organised automobile racing that began in France. The first such event was organised by the newspaper, Le Petit Journal. It took place on July 22, 1894

The earliest events involved driving from one town or city to another, using ordinary public roads. Of course, these roads had very few other cars on them and were generally in pretty poor condition. An infamous example was the Paris to Madrid race of 1903, during which a number of people, both drivers and pedestrians, were killed. The event was stopped by the French authorities at Bordeaux and further such races were banned.

In those early days, each of what were considered to be the eight greatest events of each year, was described as a ‘Grande Épreuve’, which means "great trial". They were seen as opportunities for motor manufacturers to demonstrate what their products could achieve.

In 1900 a different series of races was promoted by James Gordon Bennett, Jr., the owner of the New York Herald and the International Herald Tribune. In these races, national teams were competing for the Gordon Bennett Cup. Each country was allowed a team of up to three cars and they were entered by the country’s automotive governing body.

The Automobile Club de France (ACF) saw this approach as disadvantaging France, whose automotive industry was larger than any other country.

On the 26th and 27th June 1906, ACF ran the Grand Prix de l'Automobile Club de France. It was run on closed roads in the vicinity of Le Mans. There was no limit on the number of entries from any one country. The route was mainly on dust roads sealed with tar and lasted for more than twelve hours overall. Hot conditions melted the road tar, which the cars kicked up into the faces of the drivers, making the racing very dangerous.

This first event was won in a Renault, and it contributed to an increase in sales for the French manufacturer in the years following the race

French Grands Prix were run on several years up to the first World War and then from 1921. In that year there was also an Italian Grand Prix, and other countries in subsequent years.

Henry Seagrave, driving a Sunbeam, won the 1923 French Grand Prix, becoming the first Briton to win a Grand Prix in a British car. He later went on to win the San Sebastian Grand Prix in Spain in 1924.

Following these results, the Commission Sportive Internationale (CSI) agreed to the running of a Grand Prix in Great Britain on 7th August 1926. It was officially called the ‘Grand Prix of the Royal Automobile Club’.

(The CSI was the committee of the Paris-based AIACR, the International Association of Recognized Automobile Clubs).

Thirteen entries were registered, of which 9 started and only three completed all 110 laps. The Delage of Robert Sénéchal and Louis Wagner came in first, followed by Malcolm Campbell in his Bugatti and third was another Delage, driven by Robert Benoist and André Dubonnet (of aperitif fame). The race lasted just over four hours, during which many pitstops were made. These were mainly for tyres and engine problems, particularly overheating. Wagner, in the winning Delage had to stop frequently towards the end of the race, to dip his feet in cold water, due to intense heat from the exhaust.

When André Dubonnet took over the Delage, he had never driven the Brooklands circuit before. He was wearing an ordinary blue lounge suit. This must have been most disconcerting as he finished the race with flames coming out of his engine.

One of the factors that had motivated Hugh Locke King to establish Brooklands as the first, purpose-build motor racing venue, was to promote Britain’s place in motorsport. France was very much ahead of any other country at the time. It is worth noting that, at this event, all the drivers were either French or British and that, of the fourteen drivers who had entered, seven were British. Sadly, Hugh Lock King had died just six months before this event.

The British drivers who started but did not finish included Frank Halford (whose car for the race is on display at Brooklands Museum), Henry Seagrave and J G ParryThomas.

A second RAC Grand Prix was run at Brooklands in October 1927. This time there were only eleven entrants and only four cars completed the full 125 laps. This was the last Grand Prix at Brooklands.

Over the next few years, non-championship races known as the Donington Grands Prix were held at Donington Park. The races were organised by the Derby & District Motor Club rather than by (or on behalf of) the Royal Automobile Club, they are therefore not recognised as official "British Grand Prix" events.

It was not until after the Second World War that British Grands Prix got going again.

The Royal Automobile Club International Grand Prix on 2 October 1948, was held at Silverstone and another in 1949. In 1950, the first British Formula One Grand Prix was held at the same venue. This was now part of the World Championship of Drivers and laid down the foundations of what is recognised as F1 today. 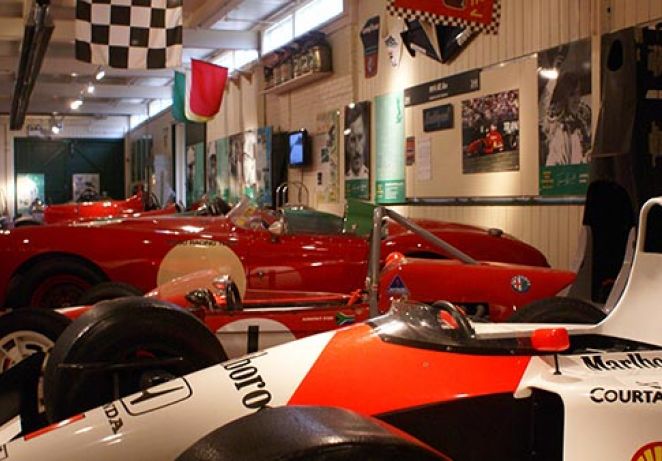