The Colonial or Overseas Course

Approaching Mercedes-Benz World, with the Railway Straight and the hotel on your left, you may have noticed 4x4s being driven around an off-road course. Some 10 acres of rough terrain have been laid out to include extreme inclines, water crossings and muddy tracks. This is a recent addition and is all part of the MB World 4x4 Driving Experience aimed at both children and adults who wish ‘to encounter a range of exciting driving challenges’.

To most visitors, Brooklands is known for its magnificent concrete oval Track, together with a Test Hill, built in 1907, and the Campbell Road Circuit build in 1937. They would not associate it with off-road vehicles being driven up steep, earthen slopes, through fords and across axle-twisting obstacles. However, a little-known feature may prove that this should not be true.

It appears that during the winter of 1931 a number of changes and developments were made at Brooklands. One such project, undertaken by Surrey County Council, was the replacement of the old wooden bridge which took the Aerodrome Road across the River Wey with a ferro-concrete structure. Not far from this crossing, where the Byfleet Banking approached the Fork, in ‘...the summer of 1931 an ‘Overseas Course’ was mapped out in the old gravel pits beside the Aerodrome Road, and many manufacturers tried their overseas models there, a Morris Commercial six-wheeler (with Kennedy & Kemp tracks on the twin rear wheels each side) and a Trojan overseas model being demonstrated to Government representatives’ – Bill Boddy’s History of Brooklands, 2001.

The Motor of 10th November 1931 had the following advice: ‘To anybody in search of adventure I would recommend a visit to the new ‘Colonial Section’ at Brooklands. It is not practicable for an ordinary car, but those who can beg, borrow or steal a tractor or six-wheeler could have lots of fun.

The section was expressly laid out by Bradley (Percy Bradley, the Clerk of the Course) in response to a demand from a Dominion visitor for a piece of really rough going which would be equally difficult for tractors of any type. So far a Morris six-wheeler has put up about the best show on the circuit, while a six-wheeler of another famous make spent two days in one ‘hole’. The course is laid out as for Midget Golf, each ‘hole’ being given a distinctive name. The fifth ‘hole’ has never yet been reached!’

Members of the Brooklands Automobile Racing Club also read about the new development in the club’s Year Book for 1932: ‘During the summer of 1931 an Overseas Course in the old gravel pits had been mapped out by a member of the BARC, Mr F Hugh Ireland. This is just the beginning of what we hope will be an added attraction to the various amenities of Brooklands. Already several manufacturers have tried their overseas models on the course, and it has been generally acknowledged that it is far more difficult than the private tracks which are in use at the various factories. Quite recently a Morris Commercial six-wheeler and a Trojan Overseas model were demonstrated over the course and two Government representatives came down to witness the trials and were much interested and impressed.’

Who was Mr Ireland and what was his connection with the design and development of test tracks? All we know is that he was a member of the BARC between 1924 and 1931

The programme for the Inter-Club Race Meeting held on Saturday 20th June 1931 also carried an invitation. The eighth event – the Hill Climb – was scheduled for 5.30 pm, when 18 competitors would be timed ascending the Test Hill, with C H Livesey’s Wolseley Hornet making the shortest time. Spectators would then have read about an ‘extra’ event timed for 5.45pm, namely the ‘Opening and First Demonstration of the Brooklands ‘Colonial Course’.

On the conclusion of the programme, the manufacturers of several makes of overseas transport vehicles will test them upon a course which has been laid out for the purpose in the gravel pits beyond the new bridge over the river and to the right of the road to the Aerodrome. Visitors are invited to attend the demonstration where space for parking their cars will be provided.’

Just how much use was made of the course and how long it lasted are just two of many questions that remain unanswered. Perhaps our readers can add some further details. Nevertheless, it is good to know that Mercedes-Benz World is continuing an 87 year old tradition

Photo from The MOtor 10th Nov ember 1931 showing the track and the Colonial course, including a dicey looking log bridge.

Mention of the Colonial Course in the 1931Inter Club Race Meeting Programme. 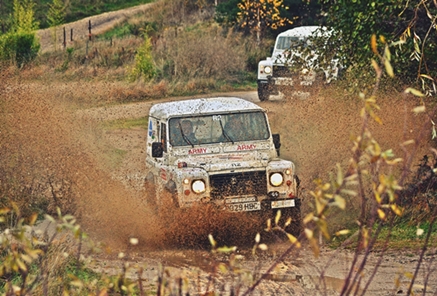 Mercedes-Benz World are keeping up the tradition of off-roading at Brooklands - this is the Museum's Military Vehicles Day which uses their 4x4 course.