In this article Tim Morris takes a brief look at the history of electric cars and some of the occasions when they have appeared at Brooklands as we look to the past in order to look forward to future motion.

Electric cars may be on-trend at the moment, but they are nothing new. Thomas Edison was producing electric vehicles in the US from 1895 and by 1906, the year construction began at Brooklands, he had a fleet of them. Electric cars developed around the same time as cars with an internal combustion engine. Karl Benz was producing the Patent One trike in 1885 powered by combustion and Ligroine which would lead to the worldwide dominance of not only the internal combustion engine but the automobile itself. Electric power, however, was being utilised earlier than that. For instance, Siemens & Halske had an electric car(t) powered by overhead cables in Berlin in 1882. Back in the UK, Thomas Parker invented his own fully battery-powered car in 1884 and put it into production.

Electric cars at this time would travel at around 20mph and were marketed towards ladies as they were much cleaner and didn't need to be hand-cranked to get them going. By the late1890s they were becoming faster as well, leading to Camille Jenatzy taking the World Speed record to 65mph in 1899 in a home built electric car. In fact, from 1898 to 1899 the record rose from just under 40mph to 65 mph six times, all with electric power and all in France. He was competing against another alternative method of fuel – steam. Early steam cars were also on the roads around this time but they were much dirtier and harder to operate, not suitable for lady drivers at all.

Sales of electric cars would peak in the 1910s, illustrated by the fact that nearly 40% of all cars in the US were electric in that decade. The decline, however, was rapid with the advent of much cheaper internal combustion engines, easy electric starting, better and cleaner exhaust systems plus the ease of quick refuelling and mass production techniques. It was not hard to see why electric and steam power were eclipsed as the world fell t the power of the internal combustion engine.

Thomas Edison in 1895 with the Edison Baker electric car

So, the electric car faded away only to be fondly remembered in the dawn chorus clink of bottles as electric milk floats traversed the streets of the UK. The occasional “novelty” electric vehicle continued to pop up to appear on shows such as Tomorrow’s World as curios. Sir Clive Sinclair’s C5 was one such notable vehicle, an example of which now resides in the cycle section of Brooklands Museum and C5’s have been demonstrated at some Brooklands shows in recent years by the C5 Alive group. It was a forward-thinking idea but the vulnerability of the rider and limited range put paid to mass acceptance at the time.

Things were set to change, however, with a renaissance of interest in EVs in the 1990s when concerns began to be raised about the polluting aspects of the ICE from the millions of cars on our roads and the future longevity of fossil fuels.

In the US there was a push for more fuel-efficient, low emission vehicles with the ultimate aim of zero-emission. This led to several commercial EVs appearing on America’s roads, but it was Tesla who was an early adopter of new battery technology. In 2004 they began development of the Tesla roadster which went into production in 2008 with Lithium-ion batteries and an immediate range of some 200 miles. Today Tesla has sold over 250,000 electric cars and has even sent one into space! 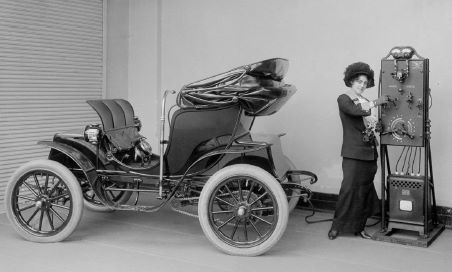 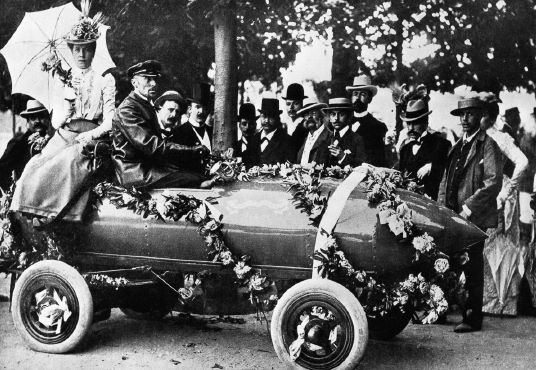 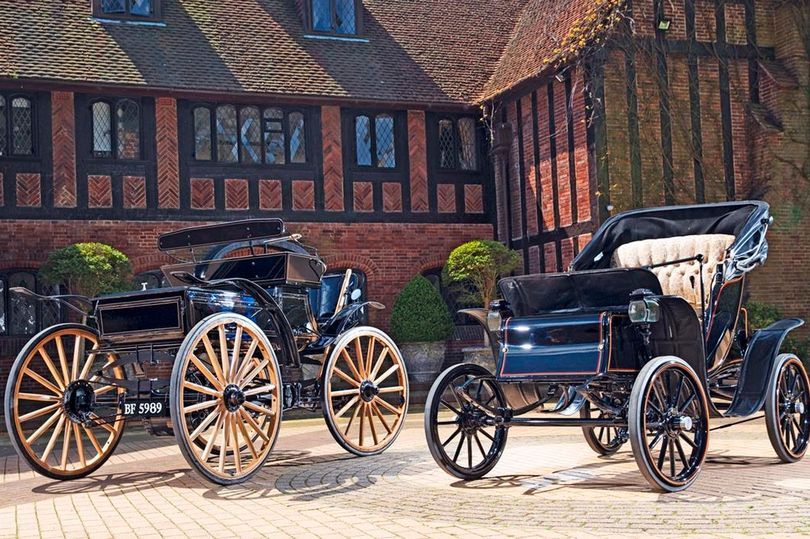 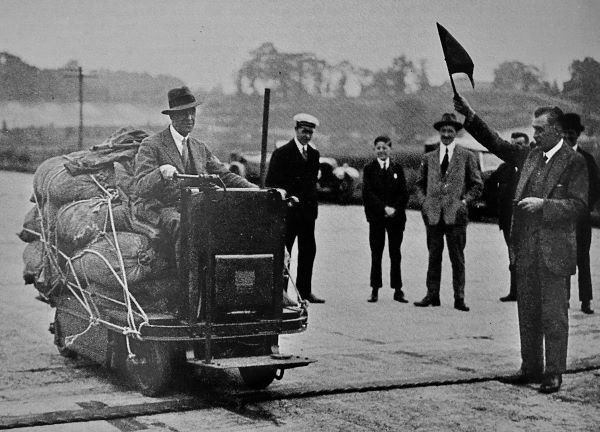 Electric cars have not made a significant impact on Brooklands despite the track coming into existence in 1907 and despite the high speeds of those electric cars at the turn of the century. There were no specific electric car races and there are few records of electric cars on the track at all however, there was an unusual “hare and tortoise” race on the 15th July 1926.

A Greenbat electric platform truck, as could be found at railway stations, laden with two tons of  wet ballast challenged some notable racers to a novelty race. The drivers taking up the challenge were notable - George Duller in a supercharged Austin Seven, Paul Dutoit in his 1924 200 mile race winning Alvis and Parry Thomas in the Leyland-Thomas. Not a lightweight field by any stretch of the imagination and certainly not in the heavily laden 2 ton truck. The race was to take place over three laps and would be handicapped with Duller given 1min 24 secs, Dutoit 59 seconds and Thomas on scratch. The electric truck was given slightly more – 1 hour 25 minutes and 38.4 seconds, no doubt meticulously calculated by Mr Ebblewhite. It was an astonishing piece of handicapping and showed “Ebby’s” skill for the truck driven by R M Hanlon (Dunlop’s former competitions manager) came in first but just 32.4 secs ahead of the Alvis which was lapping at 91.22mph. It was expected to lap at 5mph and get slower but it actually sped up with a final lap average of 5.48mph and it also proved slightly more reliable than Thomas or Duller’s cars which both failed to finish! In fact it went on to completed 13 miles, 1055 yards in a time of 2 hours 50 mins and 28secs only stopping as a transmission shaft was damaged on a driver changeover. 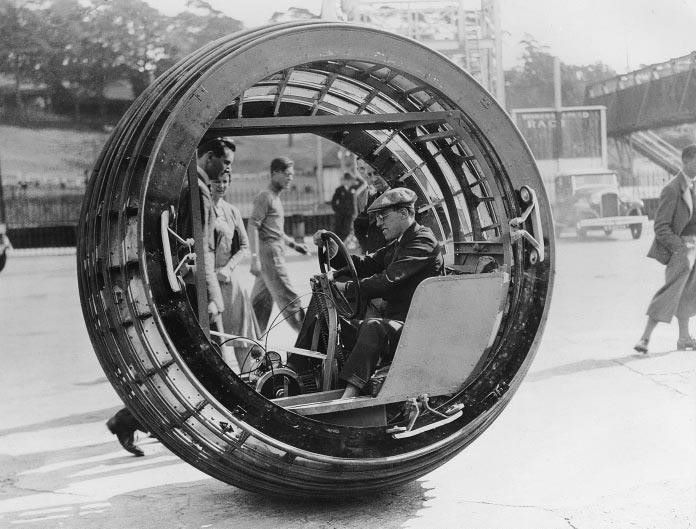 Not strictly an electric vehicle, but certainly designed as an alternative for “future motion” the Dynasphere made a brief appearance at the 1932 BARC Autumn Meeting. The giant monowheel was powered on this occasion by a 600cc Douglas motorcycle engine mounted on a trolley with the two-seat “cabin” rotating on rails inside the wheel.

It was a wobbly affair but was demonstrated at speed along the Finishing Straight. It was originally designed by Dr Purves, an electrical engineer, as a battery-powered vehicle and had been tested in such a format.

Following this demonstration run the Dynasphere is reported to have either ended up in the River Wey or the Sewage Farm, either way, it was never seen again!. 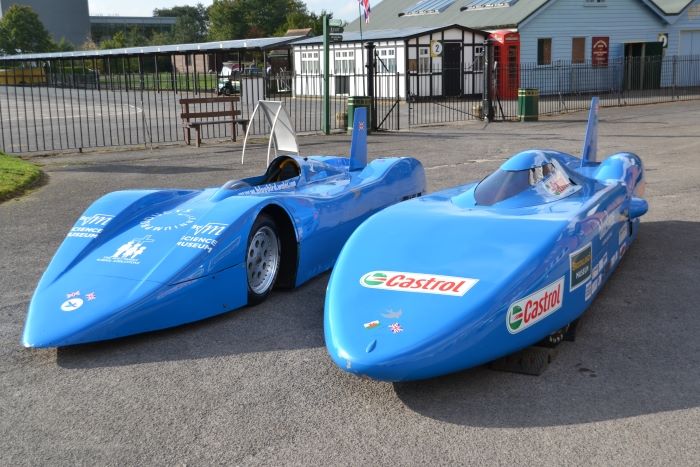 For a number of years Don Wales’ electric Blue Bird speed record car was on display at the Museum. It is pictured here at a special event in 2011 with its successor. Don took the car to a new British record at Pendine Sands in 1998 which he held for nearly 12 years. Don, of course, is also known for breaking records in another alternative fuelled vehicle – a steam car – gaining the World Land Speed record in 2009. Then there is the lawnmower World record – however that was conventionally fuelled so we won’t dwell on that.

That same event saw another alternative powered vehicle - Split Second. A dragster fitted with a jet engine which was fired up to great effect in the Campbell Car Park!

In 2014 a local electric vehicle “industry” event was held at the Museum attracting all the latest models of electric cars and vans from major manufacturers including Nissan, Renault and BMW. The star of the show was a new Tesla Model S which had just arrived from Germany. It was an impressive vehicle and effortlessly became the fastest car I have seen powering up Test Hill.

At a Historics auction in July 2016 two very early US electric vehicles came up for auction reminding us just how popular these vehicles were at the turn of the 20th century. The vehicles were a 1907 Victor High Wheel electric Runabout and a 1906 Pope Waverley Phaeton – both built as the track came into existence and both looking very antiquated – not much more than carts with batteries.

In 2018 the Members gathered together industry experts along with Autocar’s editor-in-chief Steve Cropley for the first of the Members “Electric Cars” evenings. A brand new Renault Zoe R110 and a Hyundai Kona were demonstrator vehicles on the Finishing Straight as examples of “everyday” electric cars that were about to boom. The event was repeated one year later to discuss how far the electric car and its charging infrastructure had progressed in just 12 months. With the response from these two events the Members arranged for a full showcase day at Brooklands to look at all types of future transport and fuels. “Future Motion” was due to take place on May 31st 2020, until COVID-19 intervened.

As for the future? It certainly looks electric at the moment but there are alternatives, Hydrogen fuel cells are one such possibility or perhaps steam will make a comeback? We have certainly seen some period “steamers” at Brooklands shows in the past. What is certain though is that “Future Motion” will be very different from the Internal Combustion engine we have embraced for over one hundred years. 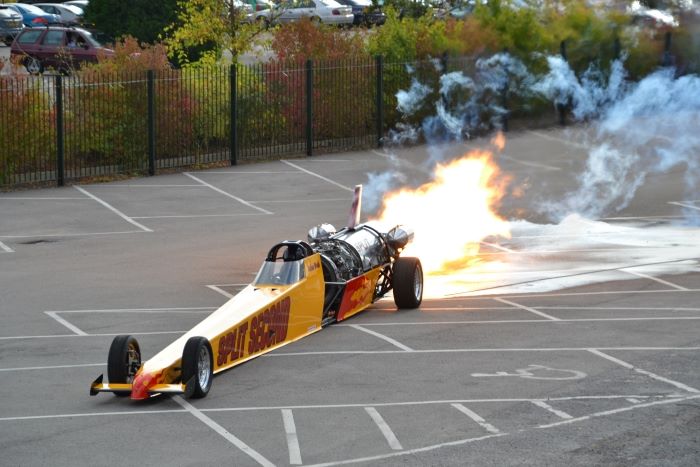 Split Second - an alternative type of propulsion but still using fossil fuels and not too practical. Powered by a Rolls Royce Viper jet engine it is capable of 358mph and is very good at melting the tarmac in the Campbell Car Park. 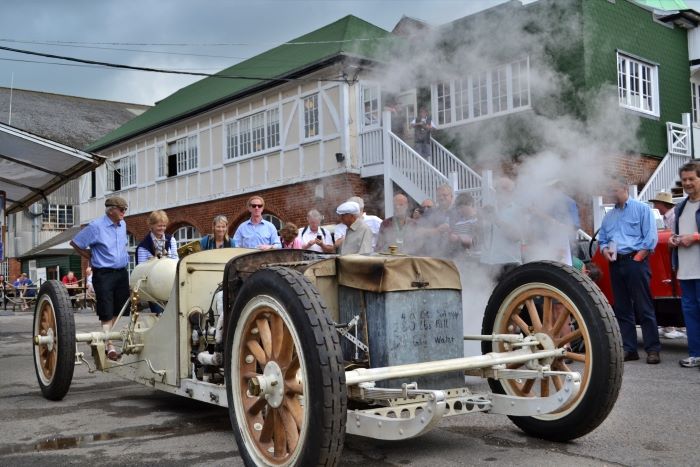 "Whistling Billy" steam car at the 2014 Double Twelve. It is based on a 1905 White Flyer of the same name but uses a 1907 20hp steam engine and is a faithful rebuild of the original. 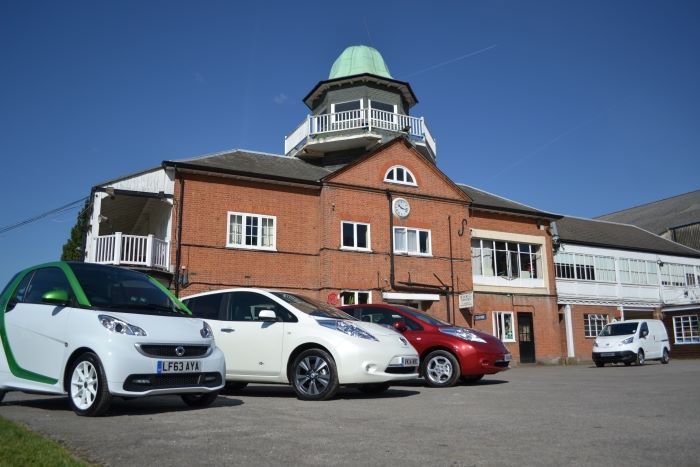 The 2014 industry event attracted a good number of electric vehicles from manufacturers including Nissan, BMW and Renault. 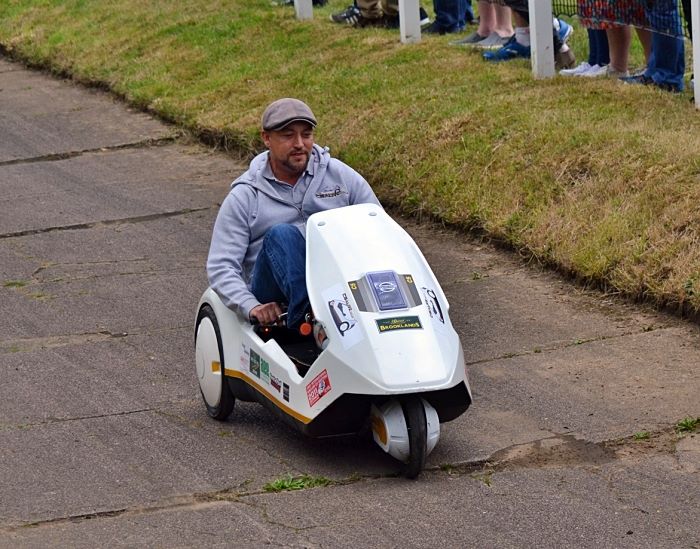 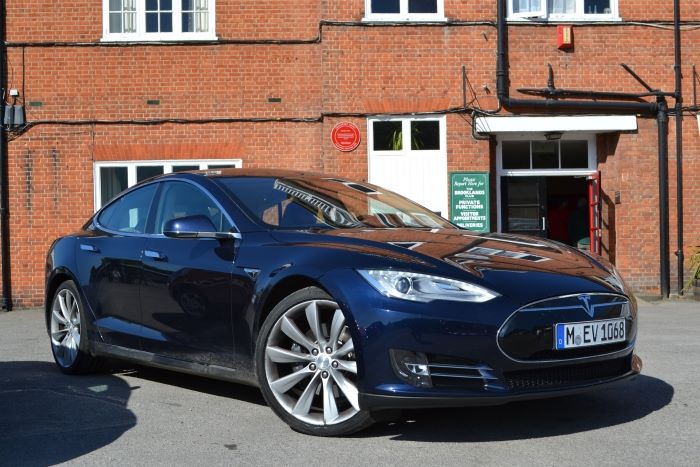 The Tesla Model S in the Paddock at the local electric car industry event in 2014. Extremely rapid up the Test Hill. 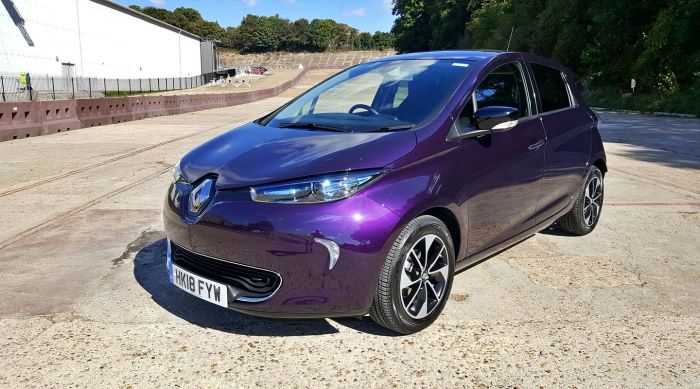 The Members 2018 electric car evening event featured two demonstrator models  - the Hyundai Kona and this brand new Renault Zoe R110. Members were given the chance to be driven in these vehicles on the Finishing Straight. It was this event that led directly to the 2020 Future Motion event, sadly postponed due to Coronavirus.