Brooklands Museum has reopened! We are now open Thursday - Sunday, timed-entry tickets must be pre-booked. Find out more

Jack Warner was the well-known actor who portrayed George Dixon on TV for many years but he had a secret past on the track at Brooklands. Here Tim Morris picks up his spyglass and examines the evidence.

A familiar friendly face underneath the Policeman’s helmet is how many will remember Dixon of Dock Green and the actor that played him, Jack Warner.

However, Jack was not just a genial fictional copper he was also a motoring enthusiast and racer to the extent that he once came third as co-driver in the Monte Carlo Rally. He was no celebrity racer in those days, this was way before he found fame in films and TV.

Jack was not all he seemed to be either, born Horace John Waters, he would race at Brooklands under the name of John Waters but started his motoring career as a sweeper up in the garages of FW Berwick in Balham, South London. There he earnt the grand sum of “tuppence” an hour. Before long his enthusiasm for the motors themselves meant that he became a fitters mate underneath Charlie Ward (later of Park Ward Coachbuilders). Berwicks decided to build their own car with Frenchman Maurice Sizaire and this led to John heading across the channel to Paris in 1913 where he helped to build the car and became a Test Driver for the new Sizaire-Berwick vehicle, and along the way became fluent in French. Driving the second prototype back to England as a bare chassis in the pouring rain would certainly have prepared him for all those nights pounding the London streets in his Police cape, but maybe it was not so cold as it looked underneath the television lights!

After service in the Royal Flying Corps during WW1 John returned to Sizaire-Berwick but the company was wound up in 1921 and so he became a salesman for a company called Watkins and Doncaster who distributed a car from Italy called the Ansaldo. However, it was the closure of Sizaire-Berwick that reawakened his interest in the stage. Whilst at Sizaire he became friendly with their Clerk, Vernon Lee, who consequently introduced him to the Sutton Amateur Dramatic Club where he featured in many of their productions eventually becoming their President.

It was therefore not surprising to find him frequenting Brooklands to quench his thirst for speed which had been enthused by Georges Sizaire first in 1913 when he burst through the French factory's door declaring that “Pairsee Lombair” had become the first driver to “lap the Brooklands track at one hundred miles an hour”.

He was introduced to Brooklands via Jack Hall who worked at Sizaire -Berwick with him and was the son of Sir Reginald Hall, head of British Counter-Intelligence during WW1. According to Jack’s autobiography, he had sold an Aston Martin to Mabel Lister, who was a ballet dancer and motoring enthusiast, and she asked "Jack" to race the car for her. Of course he leapt at the chance and consequently entered several 200 mile races at Brooklands.

However one of those races caused a back injury which, combined with another accident whilst filming, led to his later leg problems. He reminisces about this incident: “ The track was very bumpy in places and at one spot cars literally took off and for a fraction of a second were literally airborne. On one occasion when I hit this patch my cushion shot out of position and I completed the race seated on bare wood”. In his memoirs, Jack recollects some of the huge racing machines that were given names – "Chitty Bang Bang", "Softly Softly Cathcee Monkey" and "Whispering Rufus" were just a few.

He demonstrated a 250hp Mercedes Benz at one time which “had a supercharger that could be cut in at will, and to scream around the Banking in this particular monster gave (him) a sensation that (he) had never since experienced or forgotten”.

Bill Boddy’s book on Brooklands shows J Waters racing “Miss Lister’s oddly bodied SV Aston Martin” in the 1924 BARC Autumn Meeting, although it would appear he was one of the “also-rans”. He was entered in the 75mph short handicap and 75mph long handicap in September 1924 and then was listed as a driver in the Essex Junior 50 miles Handicap in October, again with Miss Lister’s Astons. On the latter occasion however, the car was driven by JA Hall instead coming third. In May 1925 he was back driving an Aston in the Essex MC 100 mile handicap, again not featuring in the results, perhaps not too surprising when he was up against the likes of Malcolm Campbell and Woolf Barnarto.

By 1933 "Jack" had opened his own small garage in St Johns Wood and it was whilst attending the Earls Court Motor Show in 1934 that he met Sir Ronald Gunter who brought a Mercedes, for which Waters earned commission, on the understanding that "Jack" would accompany him on the 1935 Monte Carlo Rally from the north of Scotland to the South of France. As "Jack" was familiar with the French roads he readily agreed and to his great surprise that they managed a third place, his best motor racing achievement.

During this time he had another sideline playing Masonic Halls and Smoking Clubs as a comedian and musical entertainer with Nelson Darling – it is here, in 1927, that his name changed to Jack Warner and Darling became Jeffrey Darnell.

Waters changed his name to Warner as he did not want to be seen to be capitalising on his sisters' success. For they were none other than Elsie and Doris Waters who found great fame with their popular “Gert and Daisy” characters through the war years of the 1940s. They were regulars on the popular radio show "Workers Playtime" and made feature films such as Gert and Daisy's Weekend" and Gert & Daisy Clean Up". In the late 1950s, they had their own TV series simply called "Gert and Daisy" and also starred in a radio show called "Floggits" which featured a star-studded supporting cast including Ronnie Barker, Joan Sims, and Ron Moody. They were awarded OBEs in the King's Honours List of 1946 for their work during the war.

So Horace John Waters went undercover and became Jack Warner and played the Music Halls and amateur theatres whilst also featuring on radio in the late thirties.

Following the failure of his own garage business in 1935 he finally left the motor industry for the last time to concentrate on his burgeoning entertainment career.

It would not be until post-WWII that he became a household name via a trio of family films where he played the patriarch character of George Huggett beginning with "Holiday Camp" in 1947. This was so popular that Gainsborough Films commissioned a trio of folllow-up movies: "Here come the Huggets", "Vote for Huggett" and "The Huggetts Abroad".

This huge popularity also allowed him to play in more cutting edge films such as "The Quatermass Experiment" and "The Ladykillers" where he played a Police Superintendent.

Jack's popularity rose even further but he would be demoted for his most famous role as PC George Dixon in the 1950 film "The Blue Lamp" which became the most-watched film of that year.

Despite being shot dead at the end of that film George Dixon was too popular a character and he was resurrected five years later for the long running series Dixon of Dock Green. The show ran for 21 years until 1976 and Warner continued to play the genial copper for all that time gaining promotion to Desk Sergeant as he became too old to pound the beat at eighty years of age. He began every episode with a short soliloquy to camera beginning "Good Evening, All" which became something of a British insititution.

Jack followed in his sisters' footsteps when he was awarded an OBE in 1965. He died in 1981 and was held in such regard that real Police Officers from Paddington Green Police Station carried his coffin. 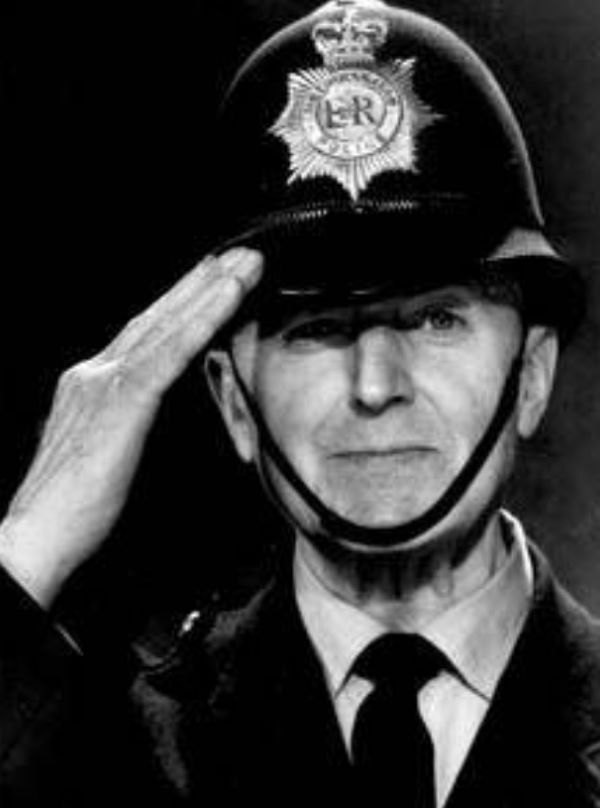 Good Evening, All. Jack Warner in his most famous role as PC George Dixon 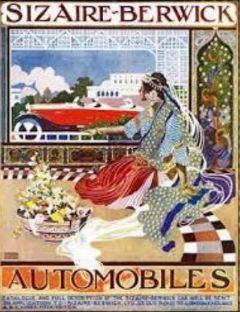 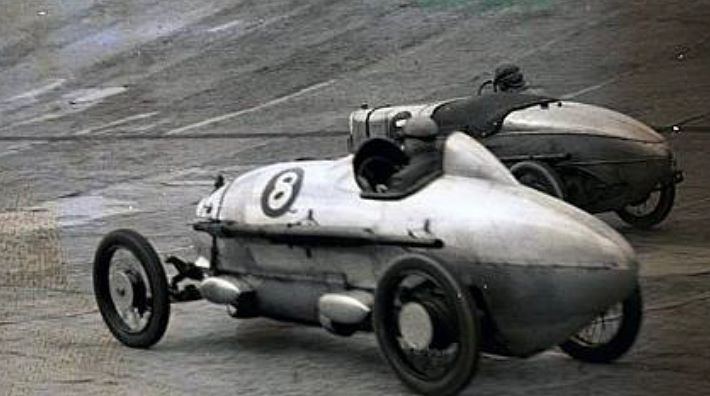 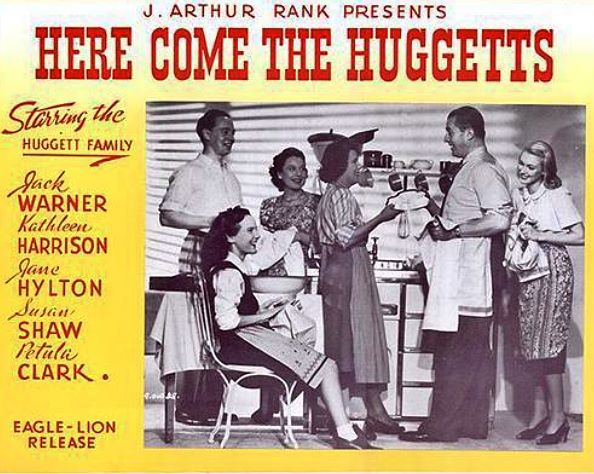 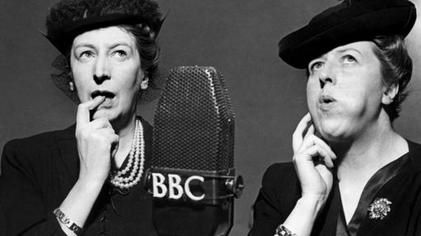 Elsie & Doris Waters in their popular guise as Gert & Daisy 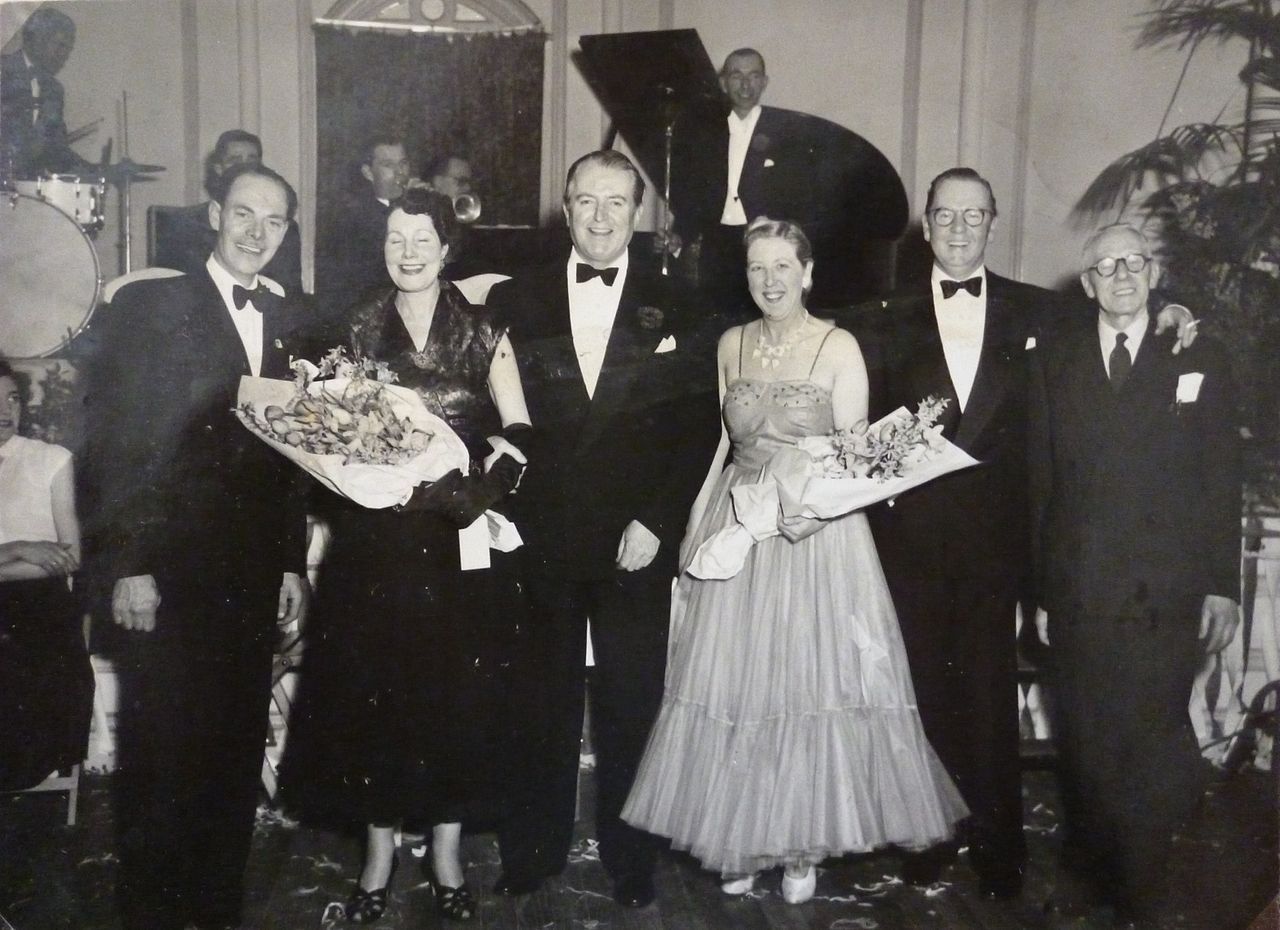 Jack Warner with his wife at a function in 1953