Tennis is one of the most popular sports in the World and surprisingly, amongst all the motors, Brooklands also had its own exclusive members Tennis Club. Tim Morris picked up the racquet in the Jan/Feb 2020 issue of the Brooklands Bulletin.

Most of us associate Brooklands with motorsport and aviation however there was another sporting pursuit carried out within the circuit, involving a racquet and ball. Tennis was first proposed by members of the BARC as early as 1911, a time when most of the available infield was being developed for use as a centre for the new-fangled pursuit of aviation. Much of the ground was still very rough with the remains of large gravel pits dug for the construction of the track along with a sprinkling of cottages and several trees, that had escaped being felled during that hectic period of construction in 1906/7.

That did mean, however, there was space to develop another facility to both serve existing members and encourage more to join for the social activities on offer. To that end four tennis courts were built to the rear of the clubhouse in the area that now houses the Jackson Shed, Motorcycle sheds and Administration block. The hard courts were surfaced with fine gravel by the British Hard-Court Company and the Brooklands Lawn Tennis Club formed, despite these being gravel courts.

They were officially opened, not at the height of summer as you may expect, but in the depths of winter, December 1911. Not an auspicious start. The weather providing light rain and a strong wind and poor light. Nevertheless, the novelty attracted a large crowd and a doubles game commenced resulting in a six all draw before failing light stopped play.

The new hard courts proved popular enough that another six were laid between the Shell way tunnel and the Finishing Straight in 1913 bringing the total of courts to a very respectable ten. A two-story observation hut was built at the Finishing Straight side of the courts, it's purpose was not clear but may have been for officials viewing the contests perhaps with changing or refreshment facilities. It was a reasonable stroll back to th clubhouse after all!

By the time the new courts opened the Membership of the Brooklands Lawn Tennis Club had reached 120 members including Hugh Fortescue Locke-King, Tommy Sopwith and the clerk of the course, Major Lindsay Lloyd. Other local dignitaries were also members of the club including Lady Dorothy D’Oyly Carte of the famous opera fame who lived on D’Oyly Carte Island in the middle of the Thames at Weybridge.

An annual subscription was £3 3s for gentleman and ladies had only to pay £1 11s 6d for a whole year's membership. The tennis club gained in popularity through to the outbreak of the First World War. Afterwards the club continued but declined rapidly as motor racing and aviation grew. The club was discontinued in the mid 1920s and the courts became derelict and overgrown.

The four courts behind the clubhouse were redeveloped as the motorcycle sheds and the larger flat area by the Finishing Straight made a handy base for a car park until 1939. It can be seen in the photo here being used for spectators and possibly a paddock area for the mountain race.

The war meant the end of all sporting activities and old tennis courts became a general dumping ground for industrial waste with an ever-increasing pile of redundant aircraft parts and general junk. This continued post-war and the pile became larger filling in the area between the Banking and Finishing Straight.

When the Museum was created in the late 1980s the height of this “dump” had grown considerably and the top end was actually at a level with the Finishing Straight. The flat top of which made a handy area for any helicopters paying the museum a visit or a nice vehicle display area, if a little muddy sometimes. It was anyone's guess what lay beneath the grassy and tree-lined surface.

With the advent of the London Bus Museum the lower slopes and wooded area were cleared revealing much of the dump’s contents. This was followed by the excavation of the rest of the dump for the more recent project to re-site the Bellman Hangar and creation of a new Flight Shed. Again more “interesting” items were revealed in the land reclamation stage and every day brought up a new “treasure” from the mud. The industrial nature of this debris posed its own problems with removal and expensive specialist sorting machinery was needed to sift the soil for contaminents. When a split oil barrel was found right at the bottom it caused even further problems with safe removal of the surrounding soil.

Sadly no discarded tennis racquets were found and there was no trace of the courts themselves. The whole area is now covered by buildings but if you listen carefully on a still Summer’s morning you might just imagine you can hear the gentle thunk of ball against racquet. 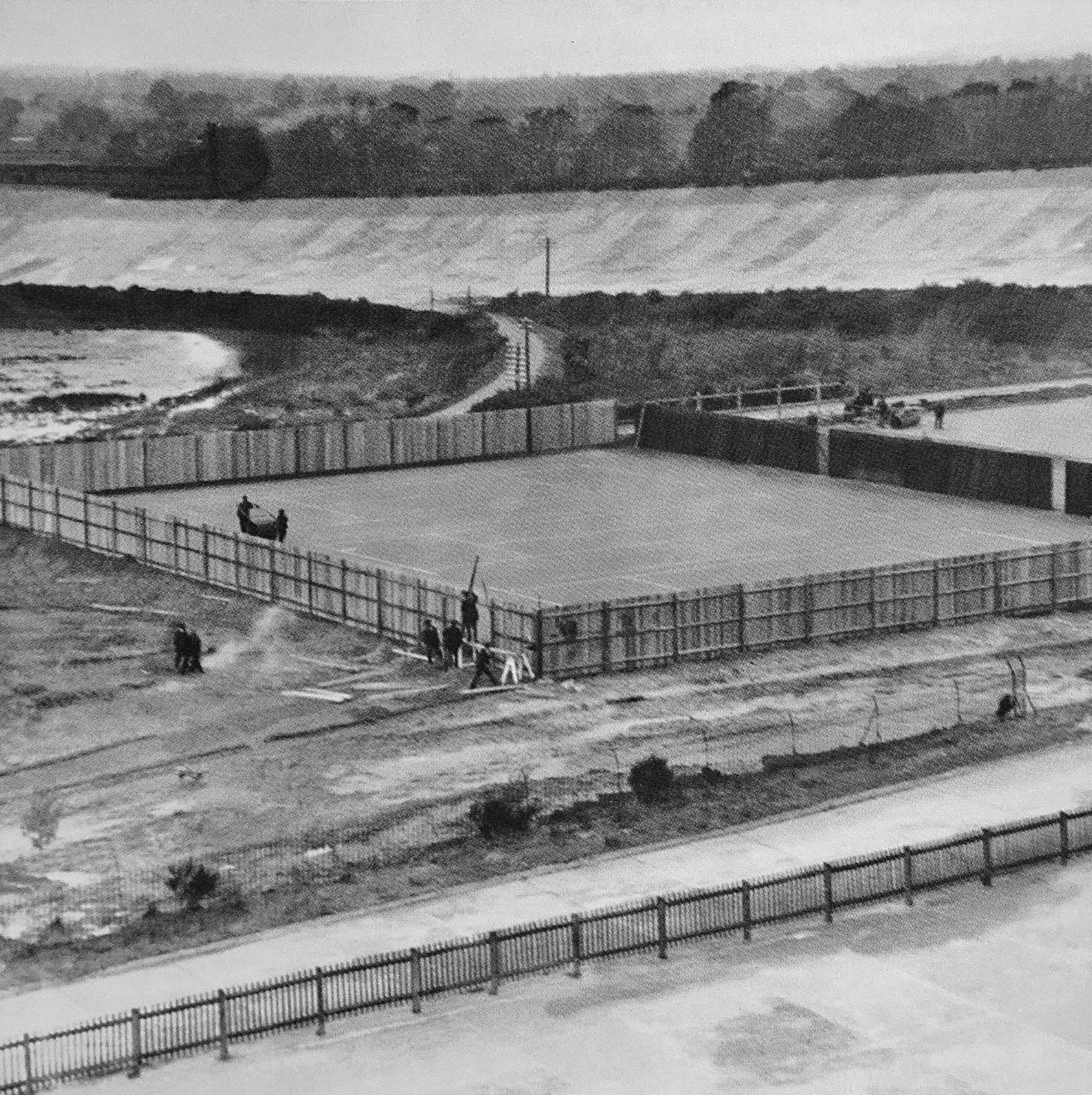 The six courts by the Finishing Straight under construction in 1913. This clearly shows the location between the Paddock run out road at the bottom and the return road curving in from the Banking above. The site now occupied by the Flight Shed and Bus Museum. 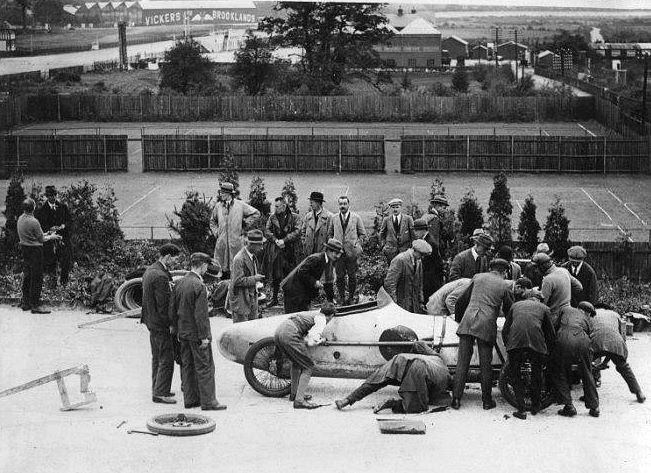 The courts can be seen in the background of this picture of Sammy Davis's AC undertaking some running repairs on the track in 1921. 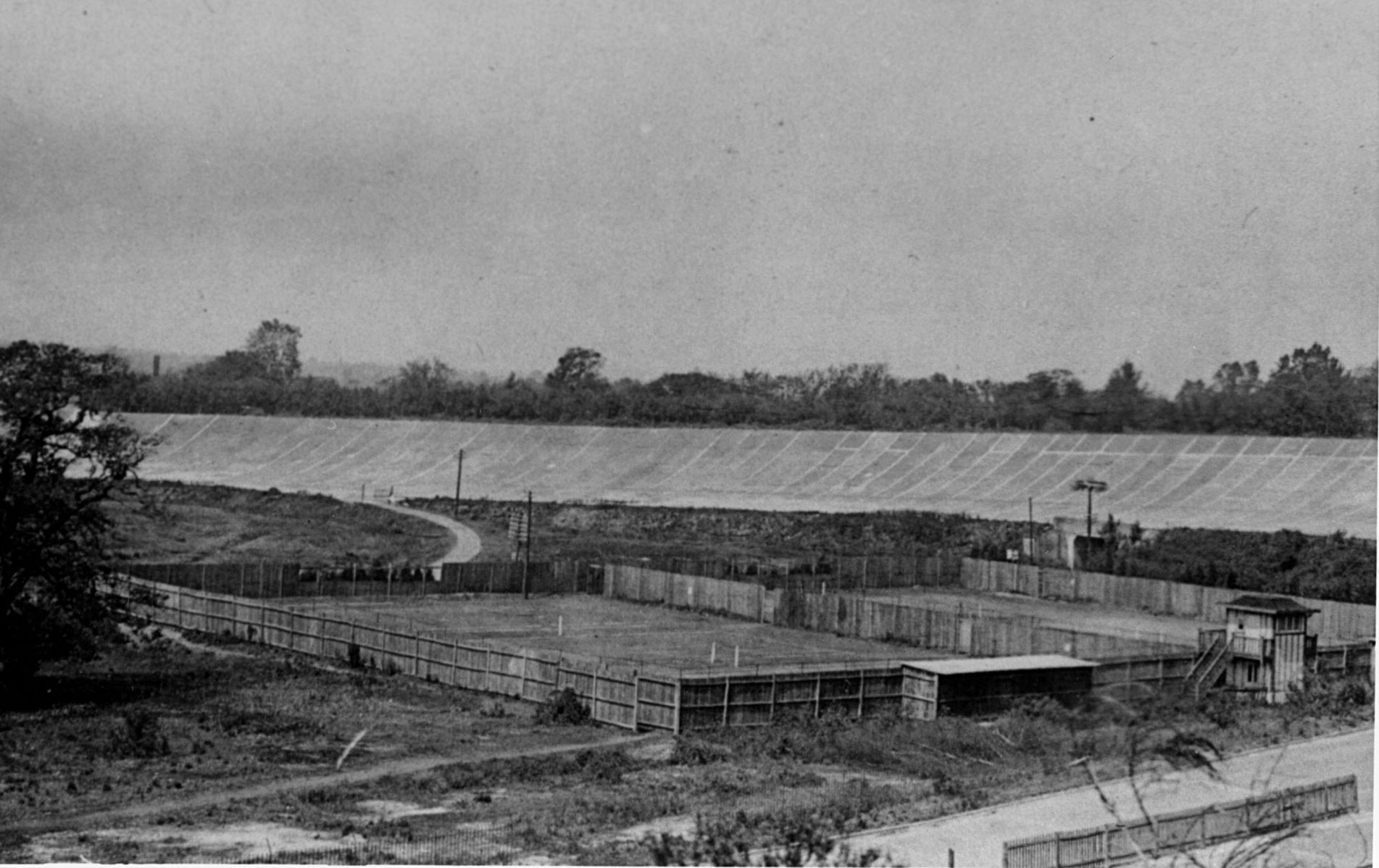 The tennis courts seen from a little further away across the Finishing Straight  - the small two storey hut can also be seen in this picture. There is also a longer shed which may have been used to store equipment as it seems to be associated with the courts rather than the track 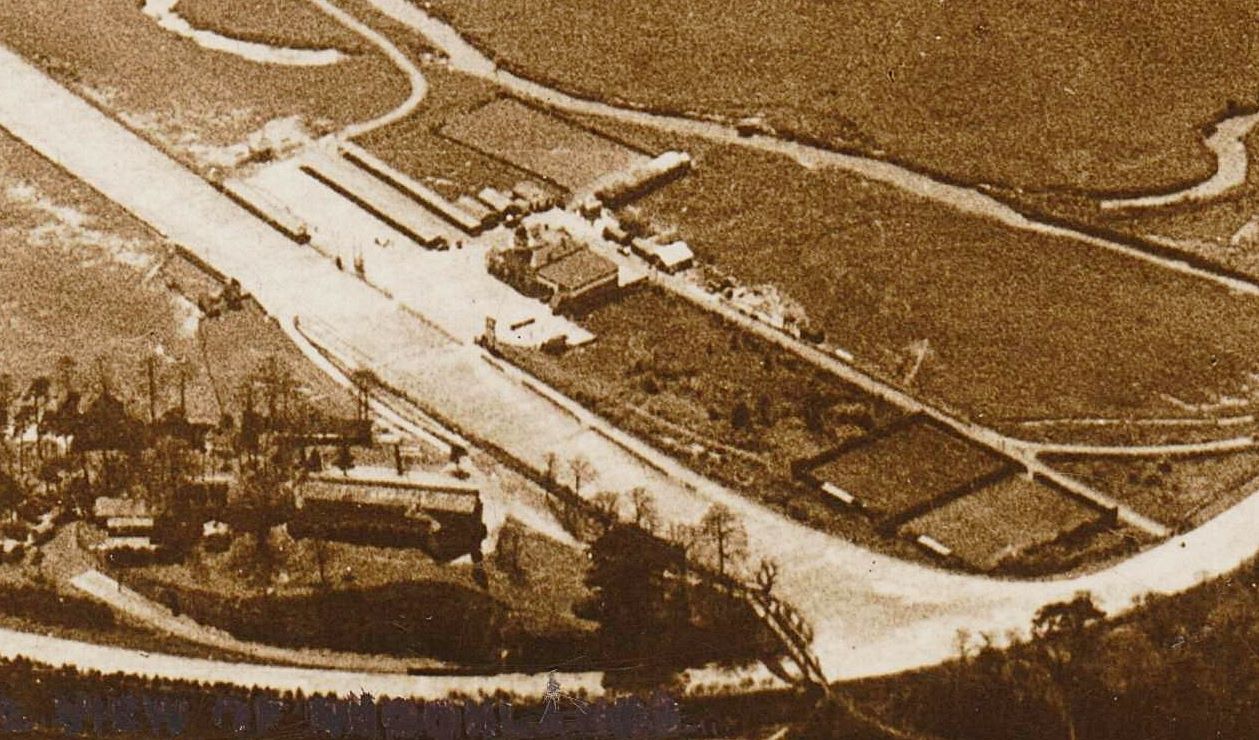 This aerial view of Brooklands clearly shows the tennis courts in both their positions although they were probably reaching the end of their life at this time which is thought to be just prior to 1925. The wooden fences are still surrounding the courts which can be seen bottom right and top left towards the middle. 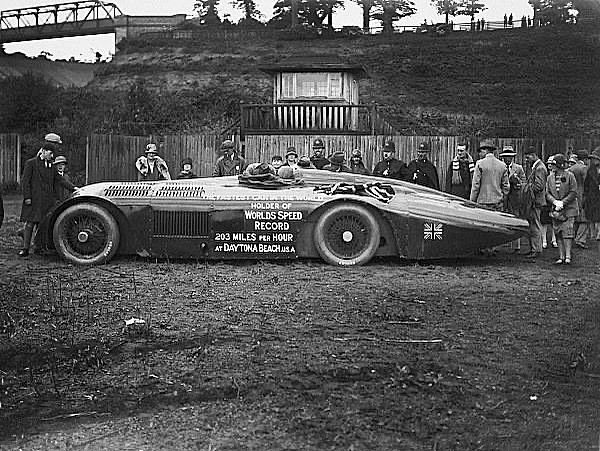 Sir Henry Segrave's Sunbeam 1000hp rests on the firm surface of the tennis courts, clearly disused at this point but with the tennis hut and perimeter fence seen in the background. Photos of this mysterious building are very rare and this is one of the clearest. Probably a demonstration in the Summer 1927 after the World record on 29th March 1927. 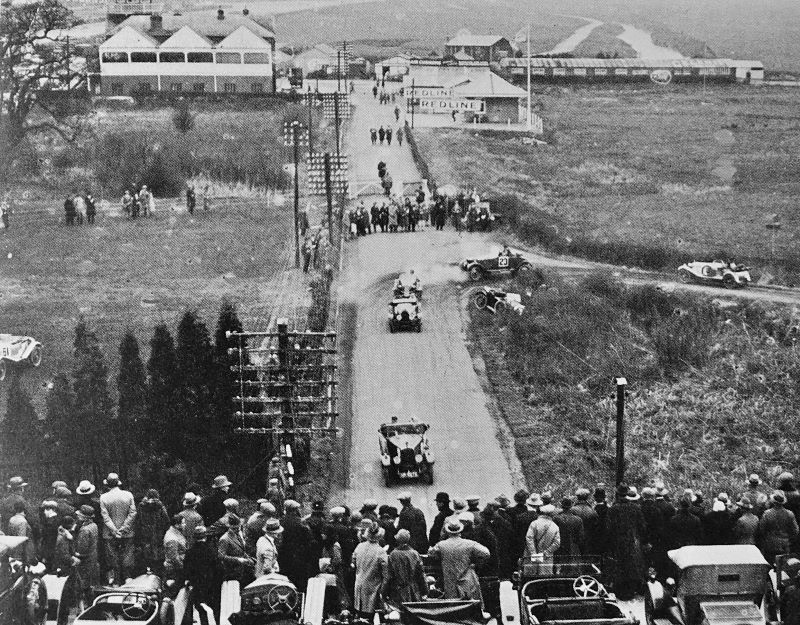 This photo of a mountain race in 1925 shows the courts in a state of disuse and overgrown. There is a line of spectators standing on them and a competition car parked up in what may have been a temporary paddock for this race. The days of genteel racquet sports seem to have long gone.

This image, also from 1925, shows the original courts behind the clubhouse themselves overgrown and disused and being used to park this AC Firefly. The Campbell shed can be seen in the background but the ERA shed has yet to be built. 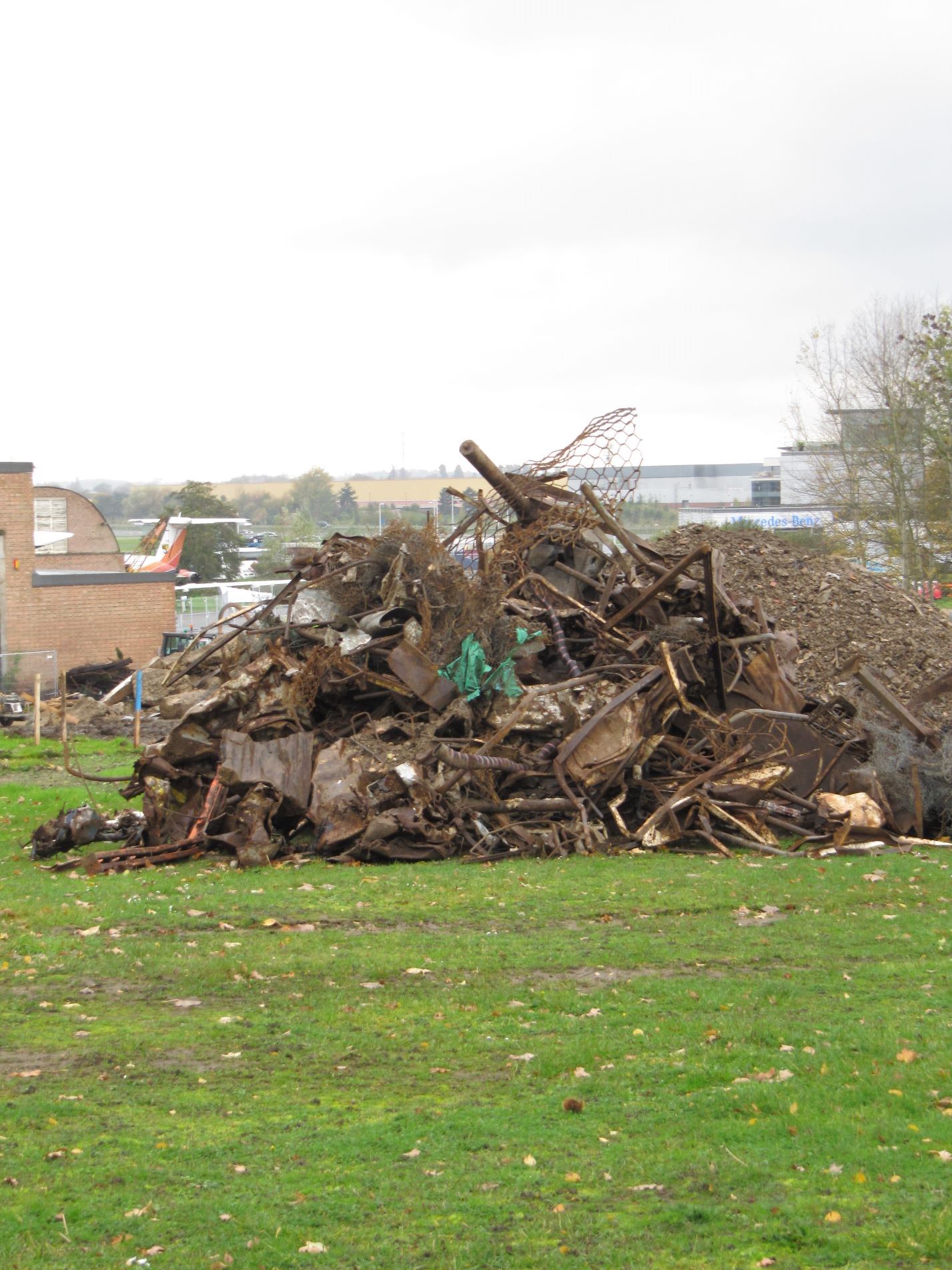 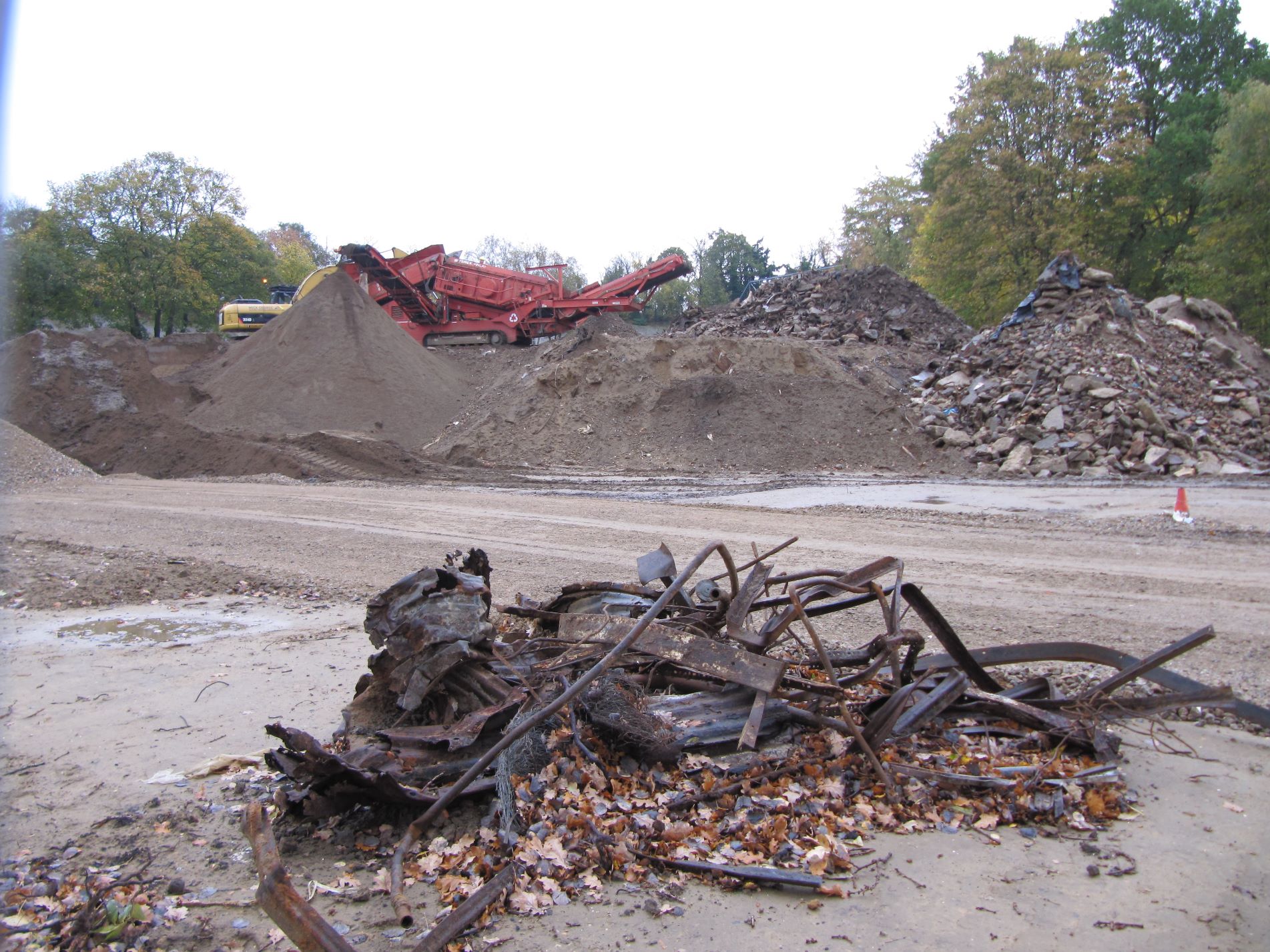 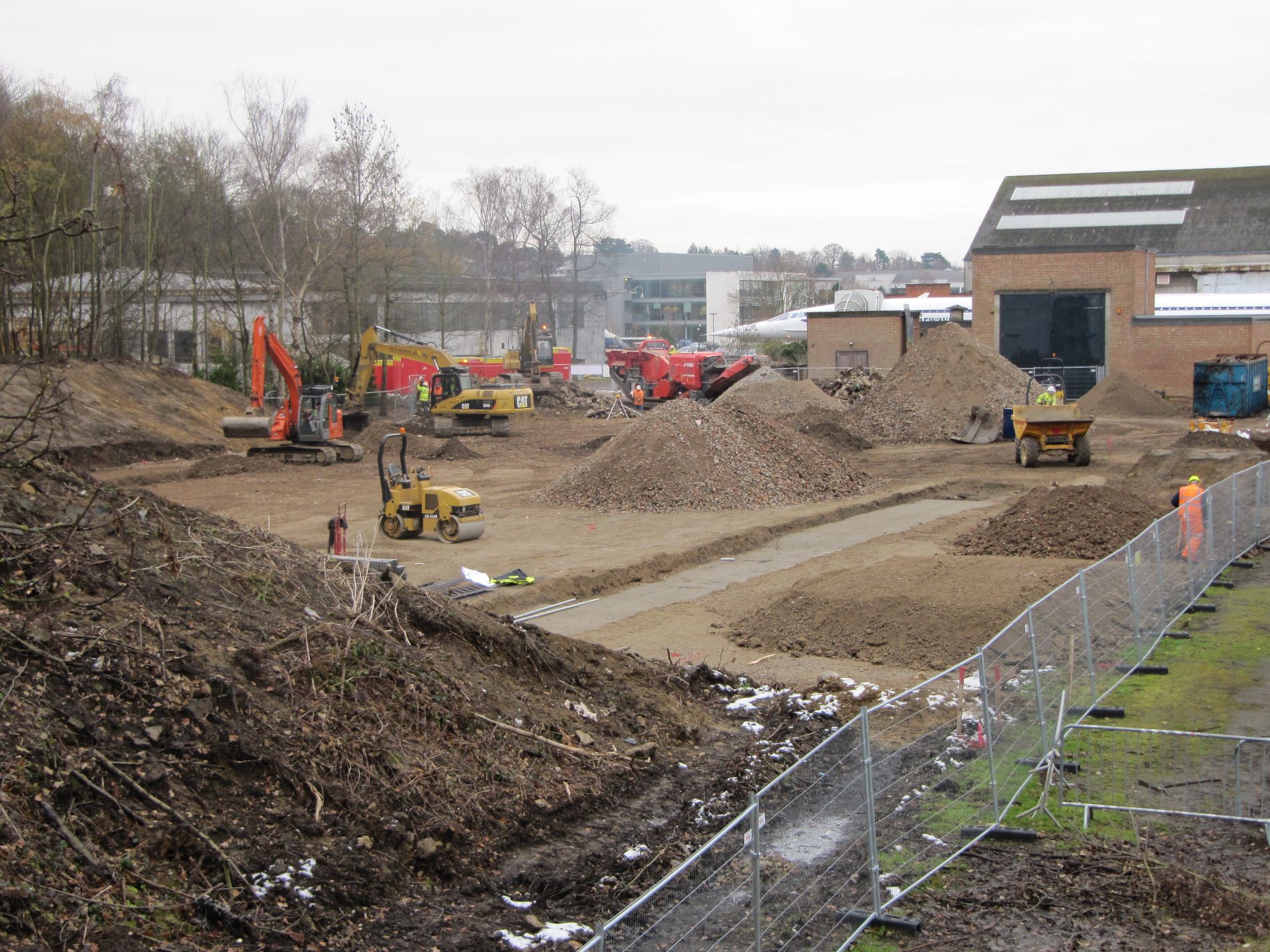 By December 2010 the groundworks had competed and the foundation work for the Bus Museum begun. This is exactly the area of the six tennis courts of which no trace can now be found. 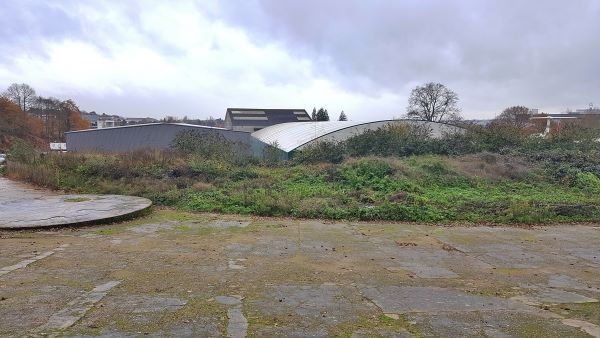 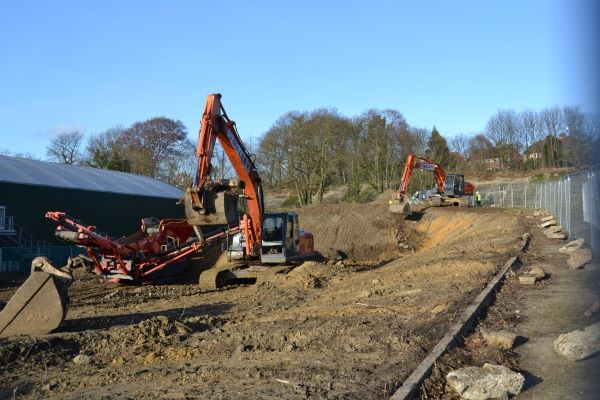 In 2015 work began to clear more of the old dump for the foundations of the Flight Shed and Aircraft Hangar. 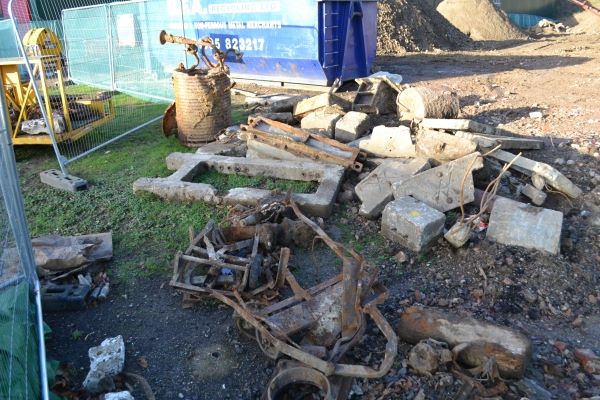 Some of the debris dug up in 2015 - more rusty ironwork and some concrete interestingly marked with the Vicker Armstrongs logo. 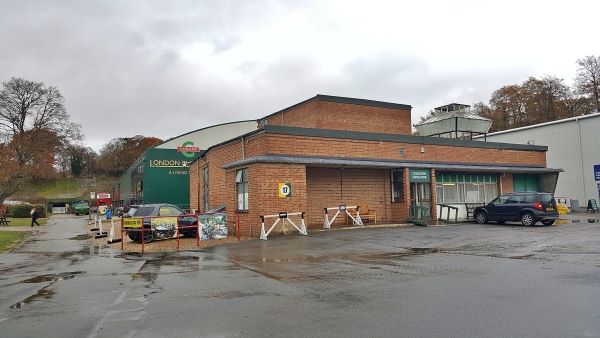 The site of the six courts with the paddock road leading to the competitors tunnel to the left - they would have been to the right of this where the Bus Museum now stands. 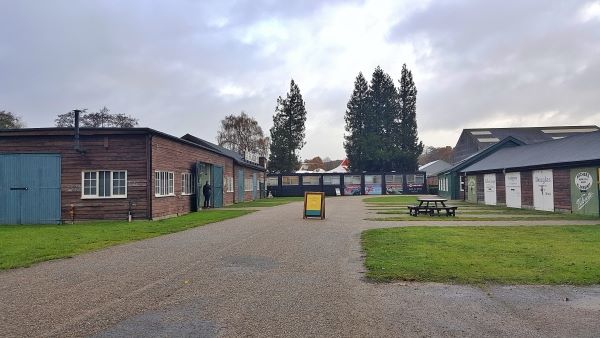 The site of the original four courts now with the Jackson Shed to the left and the racing lock-ups to the right built on the edge of the courts.