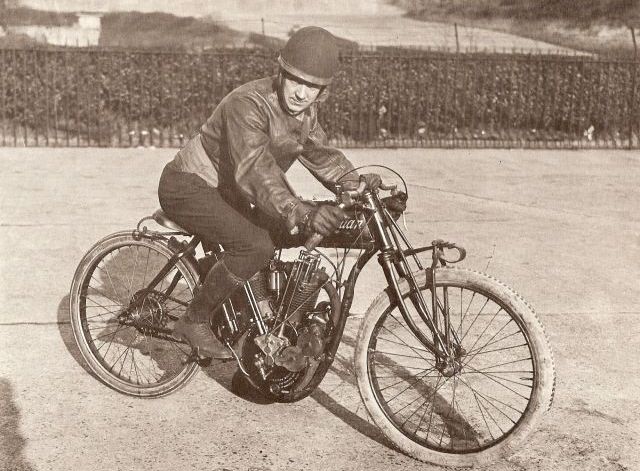 Herbert LeVack was according to many who research this period ‘one of, if not the greatest rider of his time’. He started competing and designing bikes before the First World War, but came to prominence during the 1920’s. Riding a 994cc Indian, nicknamed “the Camel” he competed in races and record attempts. The high point of his career should have been 1921 when he attempted to become the first person to reach 100mph at Brooklands. However, the title was snatched from his grasp in dramatic fashion when Douglas Davidson, riding a Harley Davidson got the record. The 34 year-old Le Vack, devastated, and with a broken highly tuned motorcycle was on the brink of walking away from the sport.

However, persuaded to continue, he soon proved he was able to reach 100mph and in 1922 joined J.A. Prestwich & Son (JAP) in their experimental racing Department. April 1922 was his first appearance at Brooklands on his 998cc Zenith JAP coming second to his arch-rivals Harley Davidson. To compound matters he also came second to Douglas Davidson on a Harley Davidson in the 1000cc Side-car race which set the scene for an exciting season of closely fought racing in the 1000cc events. The Record Run On a damp 27th October 1922 Herbert Le Vack arrived at Brooklands to attempt to become the first to average 100mph over five miles. His confidence must have been high after good performances at the previous weeks race meeting. From a flying start he completed five miles in 2 min 59.48 seconds which was a speed of 100.29mph and in doing so became the first person to lap Brooklands at over 100mph. The British Motorcycle Racing Club recognised this achievement with the award of the first ever Brooklands Gold Star. There after a motorcyclist who averaged 100mph or more for a lap of Brooklands was awarded a blue enamelled star imprinted with “100” which was to hang as a medal under their membership badge. This was also accompanied by a certificate.

Le Vack continued to have a successful career on and off the track obtaining two further Gold Stars in the 750cc and 500cc Classes. In 1931 when, working for Swiss Manufacturer Motosacoche he was sadly killed in a slow speed road accident riding a motorcycle combination in Switzerland leaving the road and hitting a tree. After a funeral Service in Geneva, Le Vack’s remains were returned to England and it is perhaps fitting that he lies in St Mary’s Church Byfleet, close to The Brooklands Track.