The sun blazed down on Brooklands at 1pm on Saturday 17th June as The Earl of March cut the ribbon in familiar BARC black and gold to officially re-open the recently restored and re-joined Finishing Straight of the World’s first purpose-built Race Track. That cut was the starting signal for a glorious hour of demonstration runs by some 130 original Brooklands cars and motorcycles (and even a Brooklands racing bicycle), all preceded by a dozen Veteran cars re-enacting the original opening parade of the Track, 110 years ago to the day. The re-opening took place on the first day of the annual Brooklands Double Twelve Motorsport Festival, a two-day event jointly organised by the Museum and the Vintage Sports-Car Club, involving speed, skill and beauty competitions, whose overall winner was Robin Gale driving a 1936 Riley Special. .

The re-enactment of the opening parade of 17th June 1907 was led by David Ayre’s 40HP Itala – the same model as was used by Ethel Locke King to lead the original parade 110 years previously. (In a delicious piece of history, the scissors used by Lord March to cut the 2017 ribbon were the same pair used by Dame Ethel to open the Campbell Circuit at Brooklands 80 years ago, in April 1937.) After this, an eye-watering line-up of cars and motorcycles, all with original Brooklands pedigree and many of them rarely seen, proceeded to do demonstration laps on the Straight, giving the large strong crowd their first taste of how a typical day at Brooklands would have been enjoyed before it closed to the public in September 1939. Cars eager to blast up the track in a two-hour spectacular included Lorne Jacobs’ recreation of the 1927 Napier-Campbell ‘Bluebird’ land-speed-record breaker and the Marker Bentley from Stanley Mann Racing. Other four-wheeled celebrities included one of the 1927 Delages which took the top three places in the second British Grand Prix, held at Brooklands 90 years ago this year (accompanied by Peter Mullin’s later ERA-engined version and with another two of these rare cars still under restoration on static display); the 10½-litre V12 1924 Delage DH Land-Speed Record car, the 1911 Fiat S76 known affectionately as The Beast of Turin; the John Parry-Thomas Land-Speed Record car ‘Babs’ and of course, the Museum’s own 24litre multi-World Record breaker and Brooklands lap-record holder Napier-Railton Special. Other cars with impeccable Brooklands histories included the Pacey-Hassan Bentley Special, the 1912 Lorraine-Dietrich grand prix car Vieux Charles III and stunning examples of the Bentleys, Vauxhalls, Bugattis and Rileys which battled it out on the circuit in period – with a stand-out vehicle being the Bentley 3-litre EXP-2, the very first of that hallowed make to win a race, here at Brooklands in 1922. Motorcycles were also highlighted with laps from a rare 1911 Humber TT from the Sammy Miller collection; a 1927 500cc Norton once belonging to Brooklands racer Pat Driscoll, himself a competitor in the 1930 JCC ‘Double Twelve’ driving a blown 1 ½-litre Hyper Lea-Francis and a 1935 250cc New Imperial ridden in period by Les Archer.

The re-opening of the Finishing Straight marks the completion of the first stage of the ambitious Brooklands Aircraft Factory and Race Track Revival project which is costing just over £8 million and has taken nearly 10 years of research, planning, fundraising and construction. It has created an arena space on the Museum site that opens up countless opportunities to showcase the motoring and aviation collection, demonstrations, driving tests and the Museum’s impressive events programme.

The excitement on the new section of Straight formed part of the packed programme for the annual Brooklands Double Twelve Motorsport Festival organised in association with the VSCC. The two days takes in three main competitive elements of Driving Tests, Speed Trials and a Concours. Competitors can take part in any two competitions and aggregate scores go towards class awards and the ultimate Overall Double Twelve Winner. Saturday 17th saw Speed Trials on the Mercedes-Benz World circuit and day one of the judging for cars in the Concours. On Sunday, the Finishing Straight, Test Hill and Banking were put to good use for the Driving Tests and the second day of Concours judging. At 3pm, invited cars and motorcycles tackled Test Hill for some crowd-pleasing ascents followed by another display of selected Brooklands giants racing up to the Banking for another impressive display of smoke and screeching tyres. At 4pm, spectators gathered in front of the Outer Paddock for the awards ceremony with the table of trophies laid out in another day of glorious sunshine before the results and winners were announced.

In a change to previous years, the Paddock for Saturday’s Speed Trials had been moved to the Museum site to further incorporate that element into the weekend, with spectators able to explore the competing machinery against the backdrop of the Clubhouse. Cars were then led through the Museum site in convoy batches across to the MBWorld track to perform their runs against the clock.

The event had attracted another capacity entry across the VSCC classes with over 100 Pre-war Racing and Sports-Cars in action, forming another round of the Club’s 2017 Speed Championship, so the competition was sure to be fiercely fought, as the scorching temperatures added yet further challenge for the drivers.

Amongst the Sports-Car classes, there was success for Stuart Rose’s Austin 7 Ulster and the Morgan Three Wheeler of Simon Edwards, whilst Geoff Smith narrowly beat Simon Blakeney-Edwards in their Frazer Nash head-to-head. Regular frontrunners John Guyatt, Kevin Morton, Dudley Sterry and Ewen Getley enjoyed success again in the Darracq, Riley, HRS and Bentley respectively whilst Robin Gale continued to enjoy his first season of competition with Class victory in his Riley Special.

As anticipated, the overall sprint honours were decided amongst the day’s faster racing machinery with a number of the VSCC’s perennial challengers taking part. Terry Crabb was a Class winner again, as he shared ERA R12C with son Jamie, who claimed runner-up spot as well as the ‘Fastest Under 30’ prize, showing real potential in the historic racer. In the same Class, Sue Darbyshire demonstrated her skills at the wheel of her Morgan again to claim the ‘Fastest Lady’ title. Although he was unable to stake a claim for the overall victory, Julian Grimwade took another Class win in his Frazer Nash Norris Special.

Ultimately the battle for the prestigious ‘Fastest Time of Day’ title became a contest between Ian Baxter in the ex-George Abecassis Alta Single Seater and Ben Fidler, making his competitive debut in father Brian’s hallowed ERA R4D, with the latter prevailing by a mere 0.2 seconds to defend the car’s title of last year.

The following day saw several of the Speed Trials’ Sports-Car entrants take part in another entertaining Driving Tests competition alongside an eclectic gathering of other Edwardian, Pre-war and Post-war Sports-Cars, Tourers and Saloons.

Coordinated again by VSCC Director and Brooklands Trust Secretary, Kevin Lee – Clerk of the Course for the VSCC’s annual New Year Driving Tests at the venue – the day marked the first competitive motorsport on the original Finishing Straight since Brooklands closed in 1939, with three of the five tests located on the restored surface, alongside the familiar challenges set out on the Members’ Banking and, of course, Test Hill, each to be attempted twice.

Following his Speed Trials success the preceding day, Robin Gale was a winner once more as he led a competitive Pre-war Sports-Cars class, ahead of fellow 1st Class award winners, Colin Reynolds in his MG 12/12 M-Type and regular VSCC Driving Tests competitor, Jon Fleming’s Austin 7 Ulster, whilst Richard Wadman proved the best of the pre-war Touring Cars in his Alvis.

Throughout the weekend, Jon Purser and his team of judges were working tirelessly to assess the entrants of the Double Twelve Concours competition, which featured another fantastic array of both racing and road-going machinery.

As is traditional, each car was awarded marks on a range of familiar criteria, including both originality and condition of bodywork, interior, engine and chassis whilst a more subjective ‘Sprit of Brooklands’ score was also applied, taking into account patina, Brooklands and general historical interest and overall character, all in keeping with the ethos of the Double Twelve Festival.

With the best scores in two of the three elements counting towards the prestigious overall Double Twelve competition, Robin Gale was crowned this year’s Champion in Sunday afternoon’s Winners’ Ceremony on the Finishing Straight in front of Brooklands Edwardian Clubhouse, with his 1934 Riley one of just two cars to claim Class victories in two events, ahead of Marc Hanson’s 1952 MG YB runner-up as the younger car, and Amelia Wooding, Top Lady Competitor for a third consecutive year in her MG Midget Roadster.

Please click here to find the results from all three competitive elements of the weekend, as well as the Overall Double Twelve standings.

More photos of the event can be viewed on the Brooklands Museum Flickr page and Andy Lambert has video of the event, which can be seen here 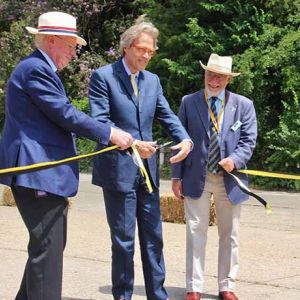 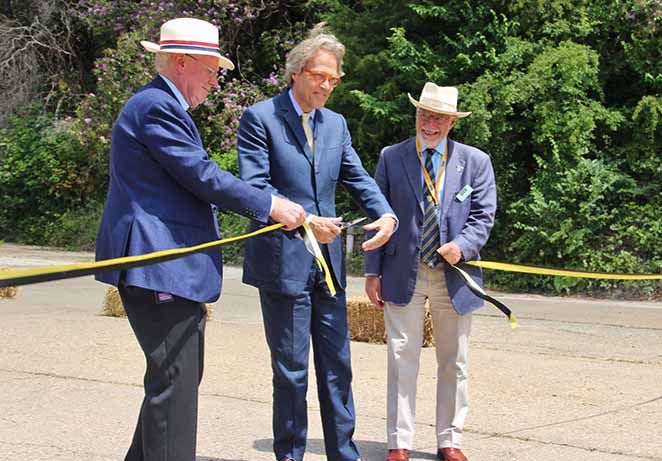 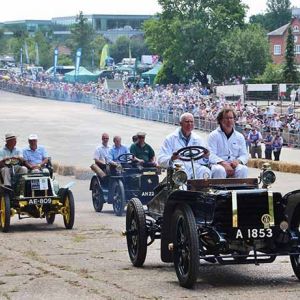 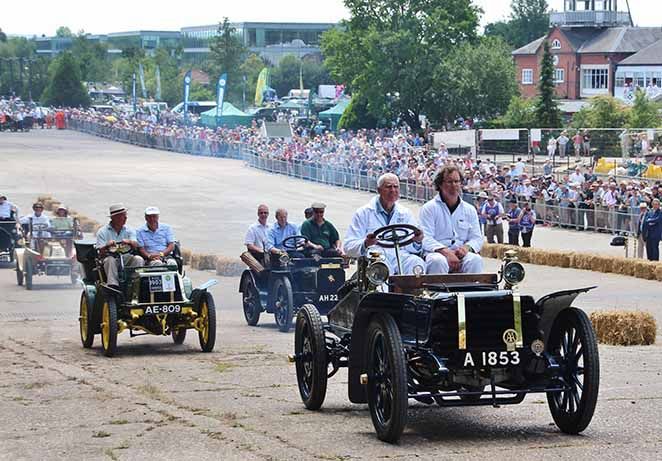 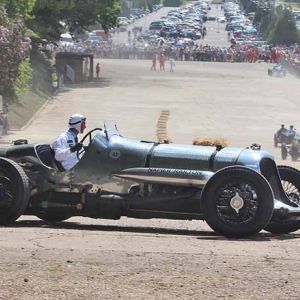 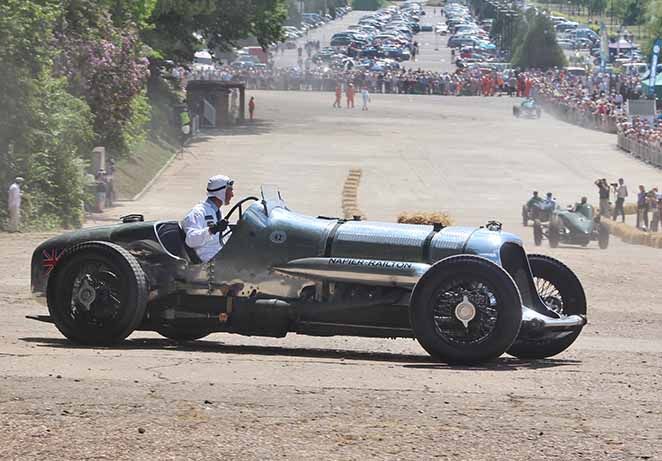 Napier-Railton on The Finishing Straight 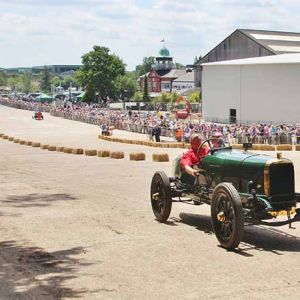 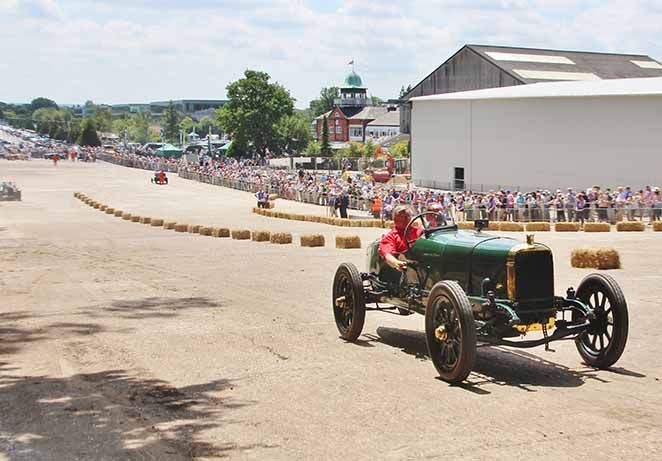 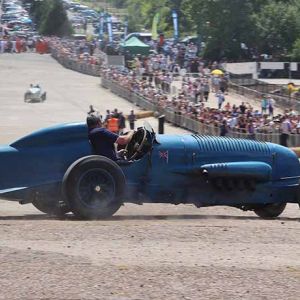 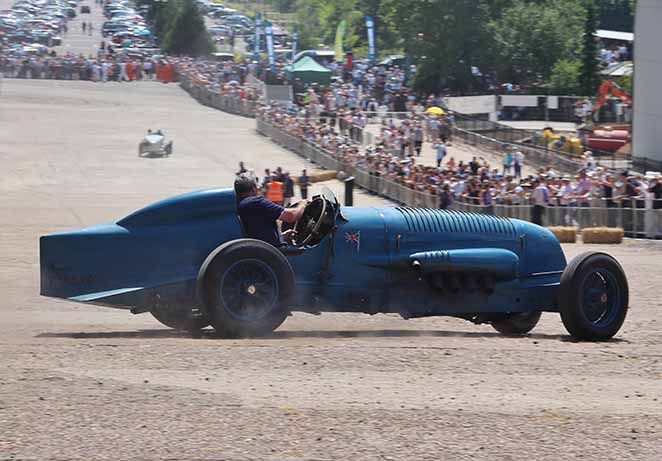 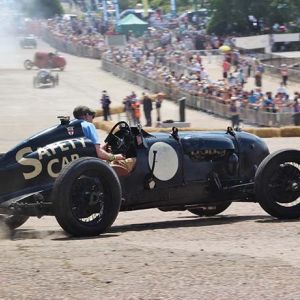 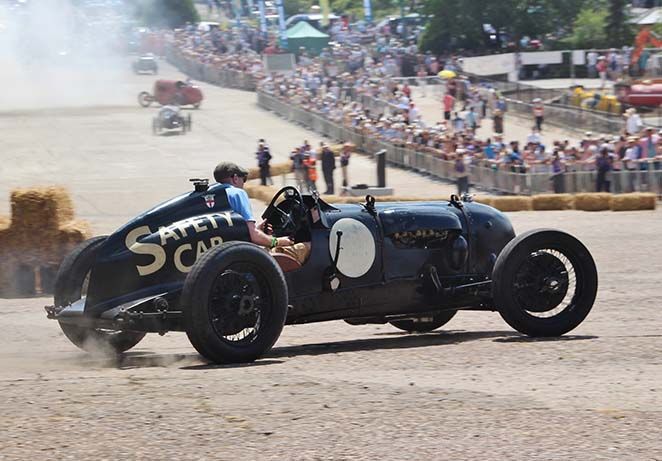 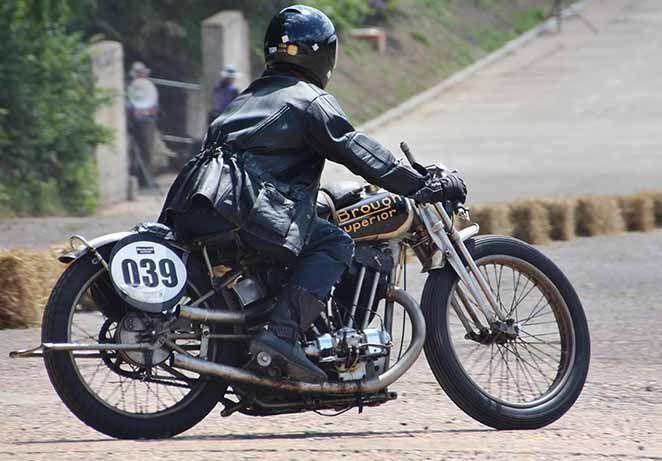 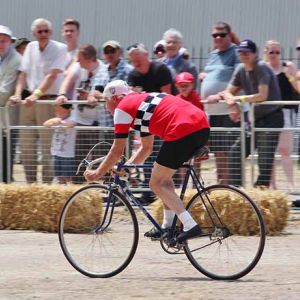 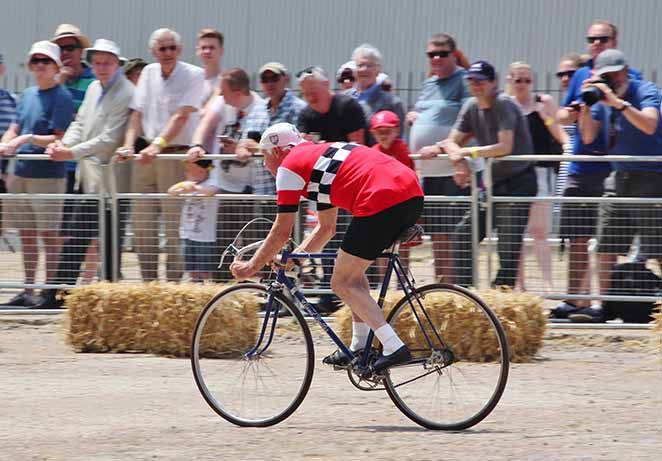 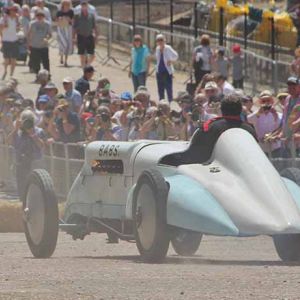 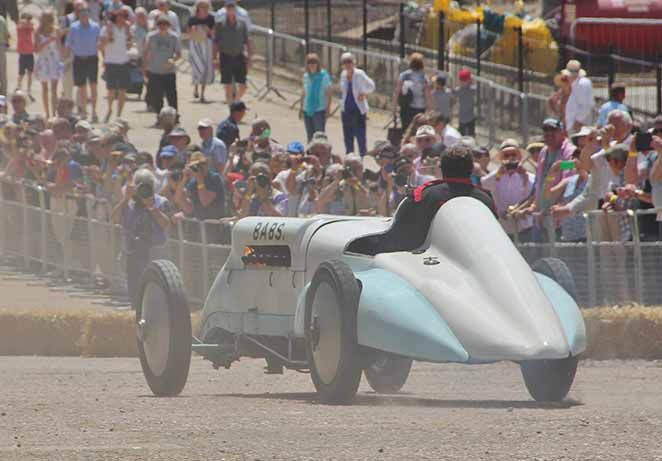 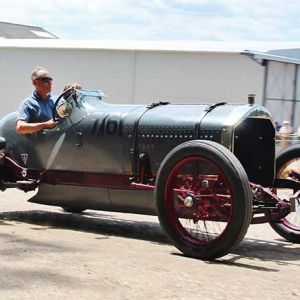 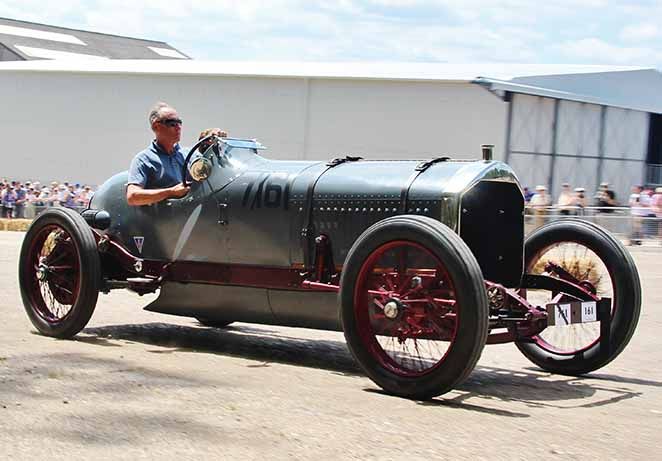 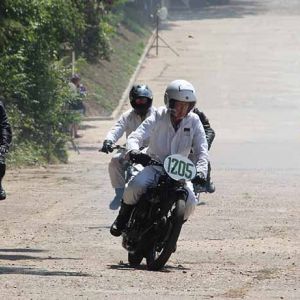 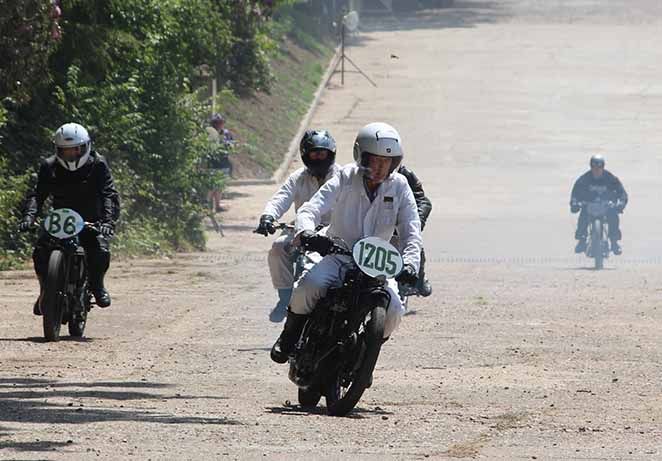 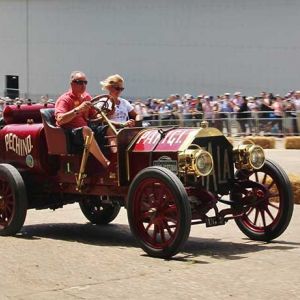 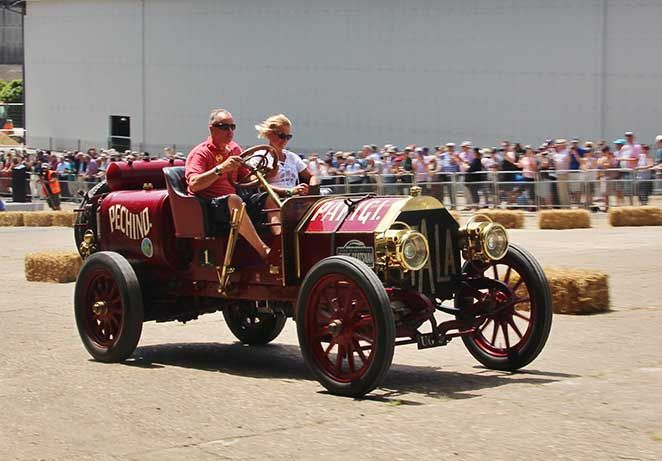 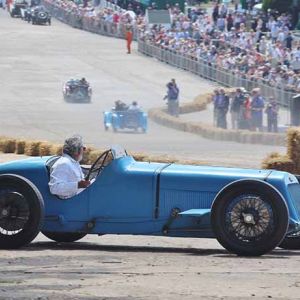 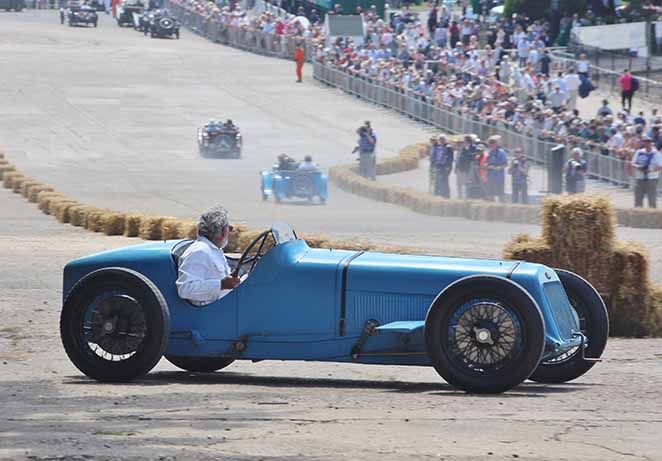